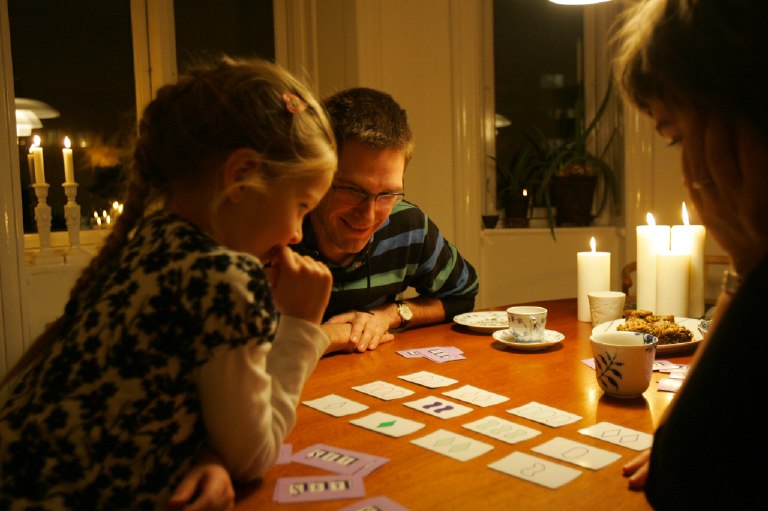 Some people say Danes are happy because they have low expectations. Not true. If they don’t aspire, on the whole, to accumulate great wealth or to achieve world dominance, what they do expect in terms of education, health care, social interaction, and exposure to the arts far outstrips what Americans expect. The Danish path to happiness, after all, isn’t about aspiring to scale peaks but rather about the satisfaction that comes from living at a high plateau. It’s about thriving in an environment that nudges them away from superficial pleasures and toward lasting-and sometimes counterintuitive-activities that bring authentic happiness.

Build an Environment of Trust

Worldwide surveys show that Danes are among the most trusting and trustworthy people on the globe. In Arhus you can leave your baby carriage (and baby) parked outside a café and not have to worry. Of course, trust works two ways. Danes also strictly obey laws. A pedestrian in Copenhagen will wait patiently at a cross-walk until the light turns green at four in the morning even if there isn’t a hint of traffic. Business works more efficiently and better when people can trust each other. That may explain why Denmark is also one of the richest nations per capita. The lesson: Live in trustworthy places, surround yourself with trustworthy friends, and be trustworthy yourself.

Tolerance of other races and lifestyles correlates with happiness in many national surveys. The Danes were among the first to give women the vote, to allow gays to marry, and to permit pornography. Some might label these policies as permissive, while others simply point to the history of civil rights in place like the United States, where as recently as 1950, it was a radical idea for a black person to marry a white person — or even to sit at the front of bus.

In Denmark, modesty is a virtue. Here the garbage-man fits seemlessly into an upper-class neighborhood, the business man sits in the front seat of a cab. In some parts of the world, people feel the need to compete with their neighbors to possess a bigger house, a nicer car, or more fashionable clothes. Here there’s no pressure to keep up with the Joneses; in fact, you lose points by showing off. The lesson: Look for neighborhoods where people are about as rich (or as poor) as you are. Build your social circle with those who accept you and don’t make you feel that you need nicer clothes, a bigger car, or anything more than what you already have.

With one of the lowest disparities in the world between rich and poor, Denmark devotes about half its annual budget to smoothing out society’s inequalities. That might be a lesson for other nations. Economic equality contributes to a sense of security. One caveat: Danes also possess a Protestant work ethic and are inclined to work hard independent of incentives.

Care for the Young and Old

Danes spend more money per capita than almost any other nation on their children and the elderly. Young people get an excellent education and health care. Equipped with a strong liberal arts education, they make productive employees. Older people are similarly well cared for. Adults spend little time worrying about retirement and focus more on pursuing the jobs they love. Older people can enjoy their final years with the knowledge that the necessities will be recovered. It’s a virtuous circle.

There’s a complex relationship between happiness and freedom. Children here are taught from an early age to make up their own minds, kids call their teachers by their first names, and freedom in general is cherished. This freedom teaches people how to make good decisions. They are free to try out a job and fail, as a social safety net will catch them. They are also free to speak their minds, and for the most part to do what they want. This is all tempered of course, by a sense of social responsibility and a solid work ethic.

Get the Right Job

Most of our waking hours are consumed by our jobs. In the United States, many people choose a job based on how much it pays or how much it will impress their friends. In Denmark, where taxes consume most of people’s wages, and ambition is frowned upon, there’s no upside to taking a job for pay or status. So people take jobs that interest them, which gives them a better chance to feel satisfaction and flow in their careers. Danes specialize in furniture design, niche technology, art, and architecture — creative, challenging careers that stimulate the kind of engaged happiness that psychologist Mihály Csíkszentmihályi calls “flow.”

Most Danes work 37 hours a week and go home to their families or their associations. They take an average of six weeks of vacation. If people work for money, they do so to get just enough. The lesson: Knock off at 5 p.m. and take your vacations. The Danes’ Protestant work ethic is tempered by their understanding that working too hard — or too long — is a waste of time. So they get their jobs done and pursue other things they enjoy.

Cultivate the Art of  Living

Proactively develop an appreciation of art that will last a lifetime. Denmark’s visionary educator and philosopher Nikolai Grundtvig launched folk schools that gave the sons and daughters of peasants a liberal arts education in literature, music appreciation, and art. They also learned the art of conversation. Today, there are still more than 90 state-subsidized folk schools where people of all walks of life can develop their love of the arts.

Winters are long and dark in Denmark, where night falls by 4:45 on November afternoons. To compensate, Danes have created cozy environments with candles, the warmth of the hearth, and the gathering of friends.

While Danes are not particularly outgoing, they have a tradition of joining associations and volunteering — 19 of 20 people belong to clubs as varied as rabbit jumping, cold-water swimming, and handball. These clubs make a big difference in a nation where isolation means unhappiness.

It’s hard to be happy when you’re unhealthy. Danes tend to be fit, with lower body mass indexes and lower rates of obesity than some of their European neighbors. Danish cities are designed so it’s easy to walk or bike from one place to another. Within a 30-minute walk, you can travel from the cobblestone center of Copenhagen all the way to the queen’s castle, which doubles as a park, or to the sea, where people swim and sail, or to the woods on the edge of town. Recreation is accessible to everyone. The lesson: Make walkable, bikeable cities with high-quality parks a priority, not an afterthought.

More than 30 percent of Danes volunteer their time to benefit their communities. This makes for a healthier society and helps people take the focus off their own troubles. Michael Artmann, the unemployed welder with a grade school education, still finds time to enhance his life through volunteering.

No one loves Denmark’s high marginal tax rate, but surveys show they tolerate it. As a result, everyone has health care, young people are nudged into education because it’s free, and all citizens have a safety net should they find themselves down on their luck or eager to find a job that better suits them. High taxes on energy use have spurred investment in renewable energy. In 2006-2007, Denmark had the largest greenhouse gas emission reductions of EU countries, 6 percent. Renewable resources currently supply almost 30 percent of Denmark’s electricity.

This is an excerpt from Thrive: Finding Happiness The Blue Zones Way by Dan Buettner, copyright 2008, all rights reserved.