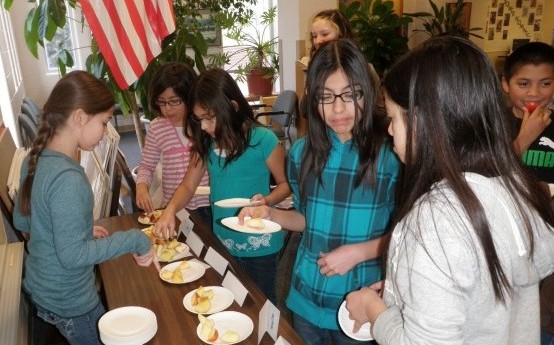 This February is Blue Zones® Challenge month, a time where students, parents, and educators team up to help kids fight childhood obesity. The Blue Zones Challenge helps kids create an environment of health — by focusing on the five evidence-based behaviors that most determine their health as they grow up.

Increase servings of fruits and vegetables — five to nine servings a day is optimal.

Maximize physical activity — kids should be moving at least one hour per day.

In part of the Blue Zones Challenge, students at Dodge Schools in Grand Island, Nebraska, held an apple tasting party. Their monthly mission: to taste a wide array of new fruits and vegetables, choose their favorites, then work these foods into their daily diet.

The kids named this “The Apple Project,” a project solely created by a Dodge School student who hopes to raise awareness of the Blue Zones Challenge and get other students involved. One student is currently turning The Apple Project into her science project, and hopes to promote apple tasting on a district level.

It’s safe to say, the first student-led apple tasting party was a huge success and now the verdict is in. According to a student-wide poll, honey crisp apples won as a clear Dodge School favorite. With that said, you may want to stock up on a few honey crisps today.