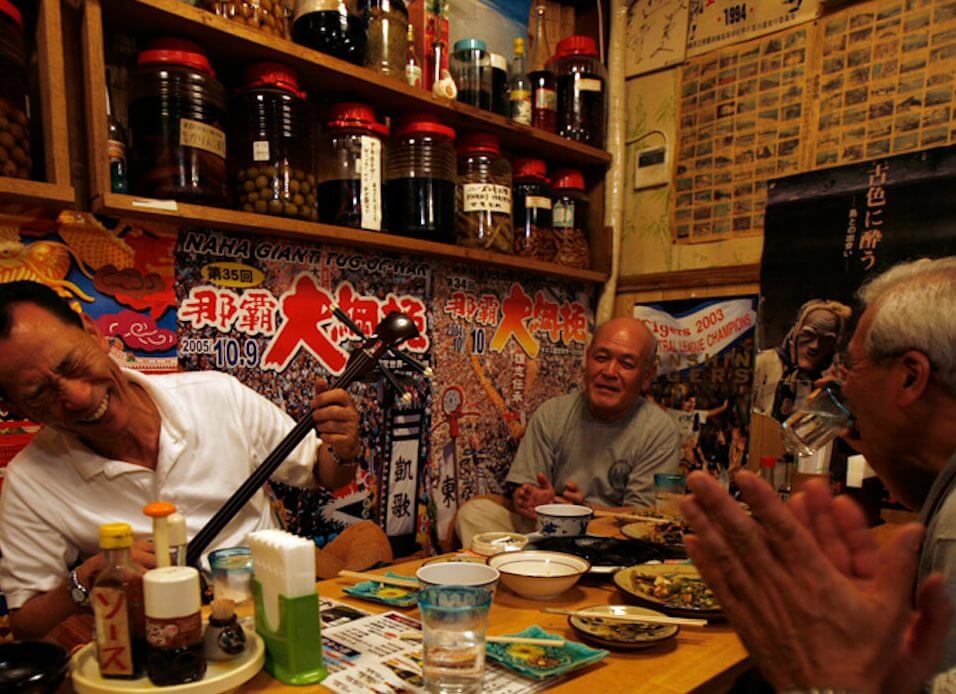 Elders in Okinawa, Japan, one of the original blue zones longevity hotspots, live extraordinarily better and longer lives than almost anyone else in the world. Moai, one of their longevity traditions, are social support groups that start in childhood and extend into the 100s. The term originated hundreds of years ago as a means of a village’s financial support system. Originally, moais were formed to pool the resources of an entire village for projects or public works.  If an individual needed capital to buy land or take care of an emergency, the only way was to pool money locally. Today the idea has expanded to become more of a social support network, a cultural tradition for built-in companionship.

In small neighborhoods across Okinawa, friends “meet for a common purpose” (sometimes daily and sometimes a couple days a week) to gossip, experience life, and to share advice and even financial assistance when needed. They call these groups their moai.

Traditionally, groups of about five young children were paired together and it’s then that they made a commitment to each other for life. As their second family, they would meet regularly with their moai for both work and play and to pool resources. Some moais have lasted over 90 years! One of the women Dan Buettner and blue zones researchers had the pleasures of meeting in Okinawa was Klazuko Manna, who, at 77 years old, was the youngest of her moai (collective age of the group was over 450!). She stressed that it isn’t just about gossip and chatter — it’s deep support and respect for each other. “Each member knows that her friends count on her as much as she counts on her friends. If you get sick or a spouse dies or if you run out of money, we know someone will step in and help. It’s much easier to go through life knowing there is a safety net.” Even today, about half of Okinawans participate in a moai, and many are in more than one. During his research and explorations on Okinawa, Dan Buettner spoke to dozens of Okinawan nonagenarians and centenarians about the role of moai in their life. He spent time with Gozei Shinzata, who was still spry, energetic, and cooked and gardened daily at 104 years old. He describes her daily routine in The Blue Zones Solution: “In the cool hours of the day, she worked in her gardens. At lunch, she mixed homemade miso into a saucepan of water. She spooned in fresh carrots, radishes, shiitake mushrooms, and tofu, and let it heat. Meanwhile, she moved up and down the kitchen wiping clean the counters, sink, and even the window. When it was ready she poured her warmed soup into a bowl, gazed at it for a few moments, and murmured, “Hara hachi bu.” This Confucian adage, intoned like a prayer before every meal, reminded her to stop eating when she was 80 percent full.” After lunch, she read comic books or watched a baseball game on television and napped. Neighbors stopped by every afternoon, and a couple of days a week her moai — four women who, together with Shinzato, had at a young age committed to one another for life — stopped by for mugwort tea and conversation. Whenever things had gotten rough in Shinzato’s life, when she’d run short of cash or when her husband had died 46 years ago, she’d counted on her moai and the Okinawan sense of social obligation — yuimaru — to support her. Her friends had relied on a lifetime of Shinzato’s support in return.”

“It’s much easier to go through life knowing there is a safety net.”

Professor Lisa Berkman of Harvard University is an expert in social connectedness and longevity. One of her studies looked into the connection between marital status, ties with friends and relatives, club membership, level of volunteerism and greater longevity. The study found that the type of connection was irrelevant. Whether it was a spousal relationship or a tight-knit friend group, all that mattered was the bond the group shared.

Research shows that your social connections can have long-term impact on your health and happiness. You mimic the habits of your three closest friends. If you share similar values, healthy habits, and life goals, then you’re likely to:

Loneliness can decrease your life expectancy by eight years. In Okinawa, members of a moai experience the stress-shedding security of knowing that there is always someone there for them.

With each happy friend you add to your network, you increase your happiness by 15 percent. Happiness is contagious.

Older people without close friends are more likely to develop chronic diseases such as heart disease, diabetes, and depression than their counterparts. They’re also at a higher risk for suffering from a stroke.

Okinawan women, on average, live eight years longer than American women. Their moai is likely an important component of their long lives. In all five blue zones cultures, social connectedness is ingrained into the culture. While Okinawans have moais, Sardinians meet with friends each evening for happy hours and Adventists host weekly meals with their congregations. By finding the right tribe, you’ll not only add years to your life, but you’ll enjoy your time here just a little more.