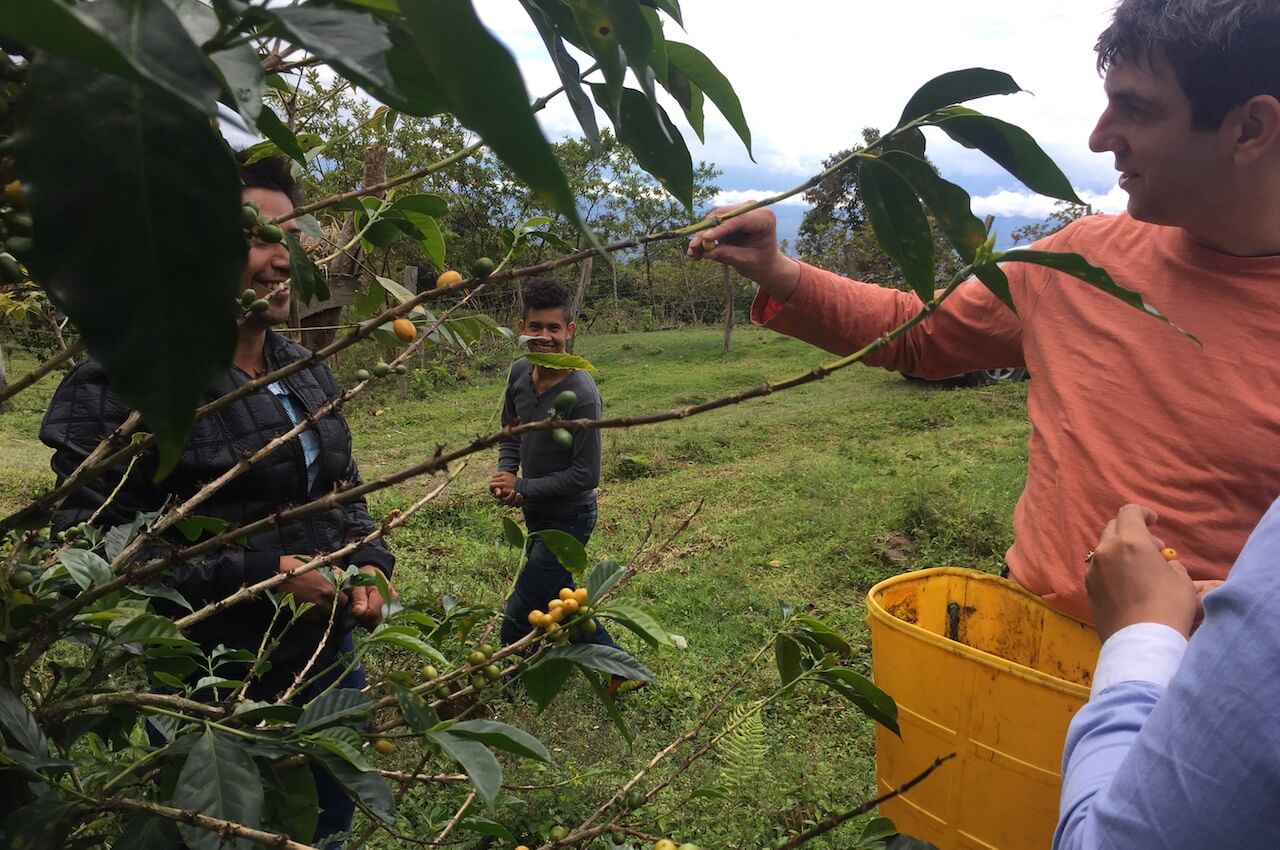 Extreme Gratitude: Why Author AJ Jacobs Traveled to Colombia to Thank the Farmers Who Made His Coffee

Only the crankiest among us can find issue with the recent gratitude trend: it’s hard to find fault in writing gratitude lists and trying to change your mindset so that you don’t take your blessings for granted. It’s a simple practice and not as fluffy as it sounds; there is solid research that it actually makes people feel better.

The definition of gratitude is: the quality of being thankful; readiness to show appreciation for and to return kindness.

New York Times best-selling author and “human guinea pig” AJ Jacobs decided to take his gratitude practice from just counting his blessings to actually thanking the people that blessed him. He recounts his mission to thank every single person who played a part in making his morning coffee (over 1,000 people!) in his newest book, Thanks a Thousand. This journey took him from coffeeshop barista to the Colombian coffee farmer to the lid designer.

The fascinating new book gives perspective on how much we actually have to be grateful for. Kirkus Review  calls it a “stirring, nonpreachy sermon on gratitude” and USA Today  says it’s “blissfully absent of pontification and full of self-deprecating humor.”

A.J. Jacobs is editor-at-large at Esquire and the author of multiple New York Times best-selling books, including The Know-It-All, which documents the year he spent reading the entire Encyclopedia Britannica and The Year of Living Biblically, about the year he tried to follow every rule in the Bible literally. He has also contributed to and written for the New York Times, Washington Post, and NPR.

He recently talked with us about Thanks a Thousand, the science of gratitude, and the best way to fall asleep.

Blue Zones: In your newest book, you take the notion of gratitude out into the real world. Where did this idea come from?

A.J. Jacobs: I can thank my son for the idea. A couple of years ago, I started this ritual before meals. I’d say a prayer of thanksgiving. But I’m not religious, so instead of thanking God, I’d thank some of the people involved in my meal. I’d say “I’d like to thank the farmer who grew these tomatoes. And the cashier at the grocery store who sold me these tomatoes.” Then one day, my 10-year-old son said to me, “You know, Dad, those people can’t hear you. If you really cared, you’d go and thank them in person.” I said to myself, that’s actually a good book idea. So I spent the next six months traveling the world thanking people in person for my coffee. I focused on coffee because it’s so simple but so important. I couldn’t live without it. Food, shelter, coffee.

BZ: What are some of your favorite stories or anecdotes from thanking people?

AJ: It was really interesting, because I got a range of reactions. Some people were skeptical – they were like, “Is this a pyramid scheme? What are you trying to sell?” But luckily, the vast majority were receptive. I remember I called the woman who does pest control for the warehouse where the coffee beans are stored. I said, “I know this sounds strange, but I want to thank you for keeping the bugs out of my coffee.” She said, “Well, that is strange. But thank YOU. We don’t get much appreciation around here. So you just made my day.” And that made my day. It was like doing an anti-crank phone call. I felt I was doing penance for all the obnoxious calls I made in high school. 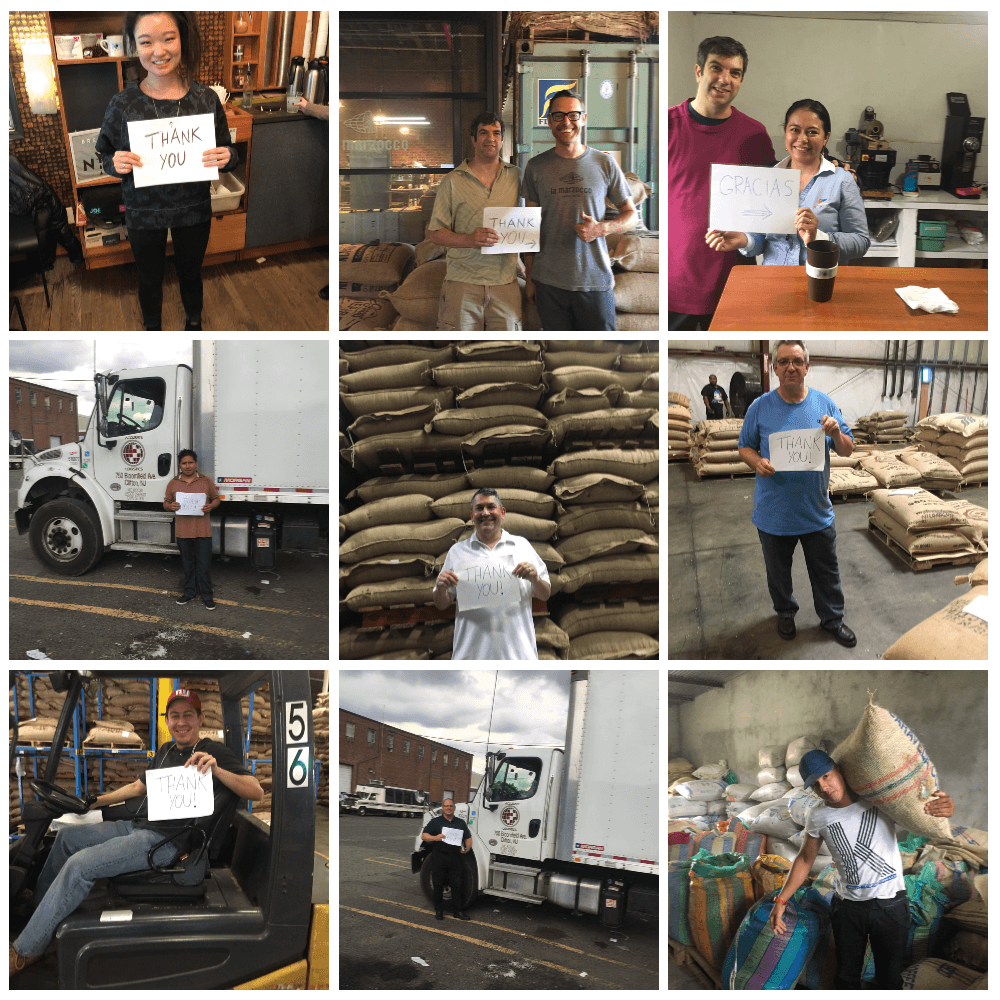 BZ: What do you think people get “wrong” about gratitude? Or how can readers take this idea of “coming from a place of gratitude” out to the world?

AJ: Well, it’s not just about being polite. It’s about being happy. When done well, gratitude causes happiness in both the person being thanked and the person doing the thanks. It’s about battling the brain’s built-in negative bias. We are very good at noticing negative things. If you hear 100 compliments and a single insult, what do you remember? Probably the insult. So gratitude is about changing that mindset. It’s about noticing the hundreds of positive things that happen every day instead of focusing on the three or four that go wrong.

BZ: We are coffee lovers, as were centenarians in blue zones regions. What do you think people would be surprised to know about the coffee industry?

AJ: I was delighted to see that coffee is, overall, healthy. I mean, it has its costs and benefits, like everything. And it should be drunk in moderation. But overall, coffee does have health benefits. There’s research that coffee lowers the odds of several types of cancer (bladder, breast, prostate, and liver), as well as Alzheimer’s. More than two cups a day can cause sleeplessness and raise cholesterol. Also, there are some still-inconclusive studies suggesting a chemical in coffee might be a carcinogen. But I’m going to embrace my confirmation bias and stick to believing that coffee is healthy overall!

BZ: How about the science of gratitude?

AJ: There’s no question that gratitude is good for you both mentally and physically. There are mountains of studies on this. It can lift depression, help you sleep, improve your diet and make you more likely to exercise. Heart patients recover more quickly when they keep a gratitude journal. A recent study showed gratitude causes people to be more generous to strangers. Health care workers who kept a gratitude journal saw their stress levels decline by an average of 28 percent. I am, of course, grateful the evidence is so clear.

BZ: What is your favorite coffee bean or beans?

AJ: My daily coffee is from a small farm in Colombia. The Guarnizo family farm, owned by eight brothers and one sister. I went down there to thank them in person. It was an amazing trip. First of all, I saw the biggest chickens I’ve ever seen — they were the size of adult pit bulls. Second, I loved thanking the Guarnizo family because they, in turn, thanked some of the people who make their job possible. For instance, the machine they use to crush the beans is made in Brazil. It doesn’t just take a village to make a cup of coffee. It takes the world.

BZ: What do you want people to take away from this book?

AJ: I’m hoping it will act as a blueprint for how to practice gratitude and make readers happier. I have a bunch of tips in there, including one of my favorites: When trying to go to sleep, instead of counting sheep, try counting things you’re grateful for. And here’s the trick: Do it alphabetically. For instance, you could start with A, and be thankful for the apple pancakes your husband made last weekend. And then go to B, and thank Barry, the HBO show, for being so smart. And so on. I rarely make it past G or H when I fall asleep.

“When trying to go to sleep, instead of counting sheep, try counting things you’re grateful for.”

BZ: Why are you so awesome?

AJ: Ha! Well, thank you for saying I am awesome. A lot of it has to do with surrounding myself with awesome people and hoping their awesomeness rubs off on me. For instance, Dan Buettner!

BZ: What do you most value in your friends?

BZ: What is your greatest fear?

AJ: Saying something dumb on Twitter and getting yelled at by thousands of strangers. Also, catastrophic climate change.

BZ: What is your favorite guilty pleasure?

AJ: I like to watch Netflix on double-speed. My wife says it ruins movies, but I love being able to watch twice as many movies in the same amount of time. And sometimes it doesn’t even feel rushed. I recently watched “Manchester by the Sea” on double-speed. I kind of wanted triple-speed for that one. I can’t imagine watching that in normal time.

BZ: What living person do you admire?

AJ: The inventor of the modern zarf. “Zarf” is the name of the cardboard sleeve that goes around your coffee cup and keeps your fingers from getting burnt. I love the little masterpieces all around us that we take for granted. By the way, zarfs have a long history — there were gold and tortoise shell zarfs back in ancient China. But the modern zarf was created in 1992 in Portland by Jay Sorensen. It’s called the Java Jacket. Thanks Jay!

BZ: When and where are you happiest?

AJ: Well, I’m in the midst of writing 1,000 handwritten, personalized thank you notes to readers of my books. It’s simultaneously a major pain in the butt — it’s taking me several weeks — and also delightful. I feel like I’m getting to know the readers of my books, which is great, since writers often have a solitary existence.

BZ: What do you consider your greatest achievement?

BZ: What is your personal mantra or motto?

AJ: Just do it! Though, I would revise it to: Just do it, as long as you’ve properly weighed the costs and benefits to both you and society at large. I know. Not quite as catchy. But I think we need some more rational thinking in this world. The gut can be a dangerous thing.