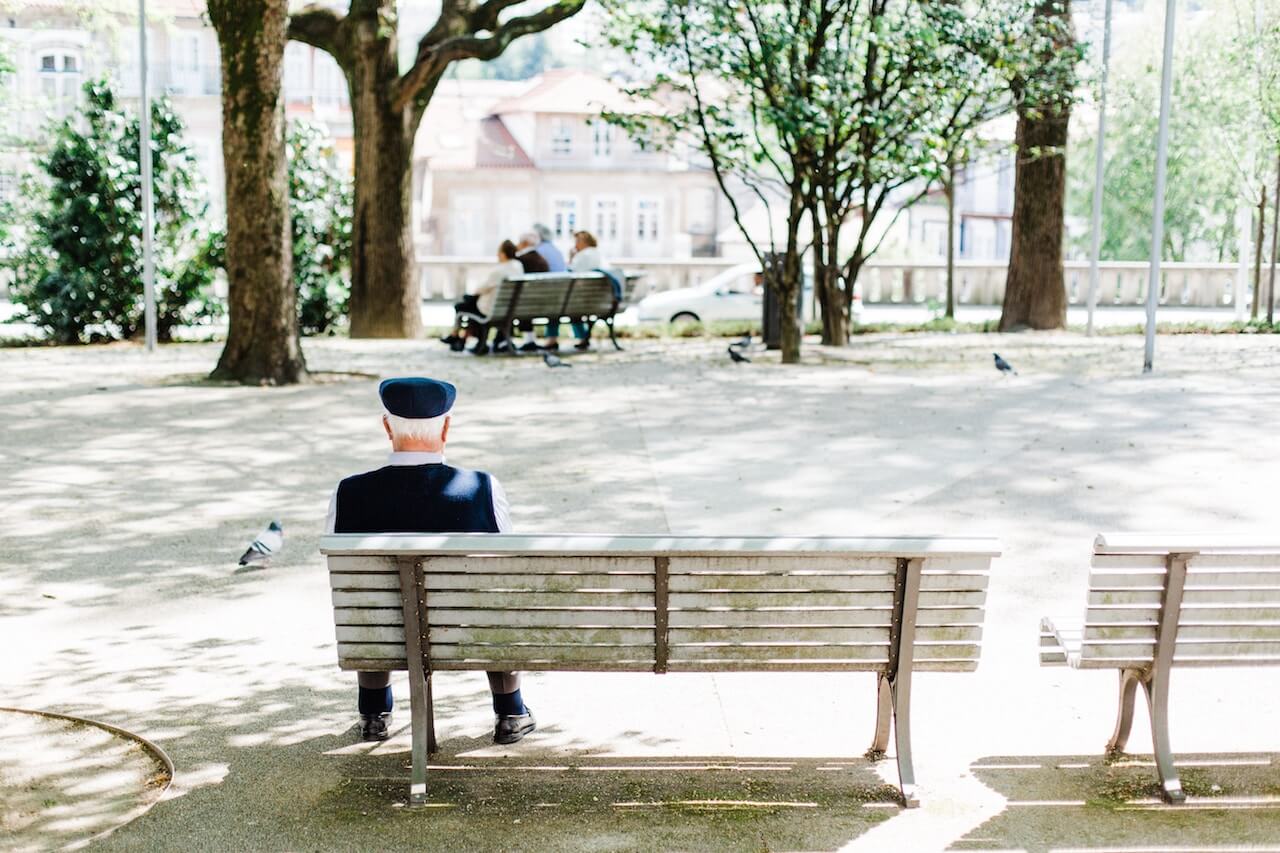 The Curse of Loneliness, a Modern Epidemic

The first time Fred Faima flew—on a commercial flight to Mallorca in 1957—he was hooked. For 43 years he worked as a telephone engineer at BT with his wife Jean and dreamed of travelling the world. So when an opportunity to do so arose six months before his sixtieth birthday, he snatched it. He capitalised on a good relationship with his GP to negotiate indefinite sick leave from work, and in June 1989 he and Jean retired on the same day – Jean’s sixtieth birthday. They spent the next 15 years flying around the world together.

I’ve Got My Memories from theo hessing on Vimeo.

Fred’s early retirement would prove to be the best time of his life. But life has changed since then. Now in his eighties, Fred lives alone in a council flat near High Wycombe.

“I do miss her, that’s one thing”, says Fred. “Every month I change the photo of her up there”. He points to a DIY calendar on the shelf next to his armchair where there is a photo of Jean beaming from behind a glass of white wine.

This Christmas will be the fourth that Fred has spent without Jean, and he admits that life has been hard since she died in 2011. “It’s just lonely now. Loneliness, that’s the problem.”

Loneliness is a scourge among older people: more than a fifth claim to feel lonely all the time. And a recent study has shown that men are particularly at risk. Loneliness affects almost half of all men over 50 and 700,000 older men suffer from severe loneliness. This figure is expected to rise by nearly 50% in the next fifteen years.

NGOs have made efforts to address the problem. Fred receives a visit each week from the charity Age UK Bucks. Age UK Bucks’ ‘befriending service’ pairs elderly individuals with young volunteer ‘befrienders’ and offers older people living in isolation a link to the outside world. The befrienders provide an opportunity for regular conversation and friendship over an extended period of time. Since half of all older people consider the television their primary form of company, this can be a lifeline.

However, a weekly visit cannot replace a lifelong companion. Fred and Jean’s relationship survived 63 years without significant hiccup, a feat that earned them a card from the Queen on their diamond wedding anniversary.

“It’s just the same every day. I don’t look forward to it”, says Fred of his life without Jean. “I can’t even get out into the garden”.

For Fred, who has been housebound for over two years, the loneliness he has experienced after losing Jean has been compounded by additionally losing his mobility. His legs had started to give him trouble years ago, and he was warned by a surgeon who performed keyhole surgery on his knees in 2000 that his pain was going to worsen. But it wasn’t until 2012 that Fred collapsed in his bedroom and has since been unable to walk.

He now has a wheelchair and occasionally one of his two sons takes him out for a few hours. But Fred spends the majority of his time in an armchair whose electric reclining function more or less represents the extent of his mobility.

Stories like Fred’s are unfortunately not uncommon among those in their older age, and where deteriorating health coincides with a major bereavement, loneliness is never far behind.

In fact, the intractability of loneliness is rooted in a vicious cycle. Not only can existing health problems such as Fred’s increase the risk of social isolation that leads to loneliness, but loneliness itself poses a significant health risk: it is twice as unhealthy as obesity. One study found that the loneliest individuals it assessed were 50% more likely to die during the six-year research period than the least lonely.

Britain has been dubbed the ‘loneliness capital of Europe’. We are less likely to know our neighbours and less likely to have dependable friendships than our European counterparts. Our prospects as an ageing society may therefore appear bleak: by 2050 a quarter of the British population will be aged 65 or over. However, the alarming news is that loneliness does not just prey on the elderly, it also plagues the young.

As the government’s cuts erode the social care system and councils cut back on the home help they offer, the role of charities is becoming increasingly important in tackling loneliness. And yet local organisations working on the issue, such as Age UK Bucks, feel the public sees them as less crucial than NGOs defending animal welfare or the environment, or working in international development. Consequently fundraising remains an ongoing challenge.

With Christmas just around the corner and the news that half a million people in the UK spent last Christmas alone, fundraisers are hoping that media coverage of loneliness will help to change attitudes, bringing in much needed extra funding to support the most vulnerable and encouraging more men like Fred to sign up to local initiatives. Schemes such as Men in Sheds, a communal woodworking project, have received significant publicity and the hope is that such programs will proliferate.

Christmas for Fred will be spent at home this year, in the flat he moved into with Jean in 1966. Reflecting on the many years that he and Jean spent together at Christmas under this roof will undoubtedly prove bittersweet. But Fred says he finds some solace in the thousands of photos and hundreds of hours of home videos he took while Jean was still alive. There is footage of their helicopter trip over Australia’s blood red interior and of their three-month voyage over the Banda Sea, to Bali and on to Bangkok. There are endless images of holidays in Spain, coach trips to Austria and train rides across New Zealand.

“I’ve got my photographs, I’ve got my memories”, muses Fred.  He stares wistfully at the shelf to his left where a greying photo of he and Jean sits next to a small urn containing Jean’s ashes. “And the main thing is I’ve got her talking and laughing in the videos”. Fred fumbles with a remote and scratchy images light up the television screen: there is Jean in a peach dress, and Fred next to her looking swarthy in his younger years. It is clear that this extensive, highly personal archive is not just a comfort but an invaluable resource for Fred, reminding him of a life that he loved and lived fully – a life that was not always coloured by loneliness.

And yet, Fred’s library of moving images is out of the ordinary; most older people do not have access to such a support. The number of severely lonely older men is creeping steadily towards the million mark, and although charities and government bodies encourage older people to retain and build social networks, many public services and activities that keep people connected are under threat.

Therein lies a tension: in a society driven by economic individualism and market-based values, supported by a “mythology of lone rangers, sole traders, self-starters, self-made men and women going it alone”, the very concept of society is squeezed and squashed, dominated by the overriding motives of individual profit and growth. We have ministers calling loneliness a ‘national shame’ and policymakers pledging to make loneliness a national priority, but by failing to acknowledge the structural factors that allow loneliness to flourish, interventions merely act as palliatives. The fact is that economic inequality fuels mental health problems including loneliness: those living in poverty are far more likely to suffer from loneliness than people with higher incomes. And we now know that the UK is the only G7 country with wider inequality today than at the turn of the century.

John Cacioppo, American neuroscientist and author of ‘Loneliness: Human Nature and the Need for Social Connection’, argues that loneliness developed for important evolutionary reasons: to remind us that as social beings we must seek the company of others. Societies that have ‘drifted into disconnection’ are therefore fostering problems for the future. For Cacioppo, we would do well to heed the words of an old African proverb: “if you want to go fast, go alone. If you want to go far, go together”.

Theo Hessing is a freelance journalist and filmmaker from London. His latest documentary, A Sacrifice, is an award-winning film about self-immolation in Tibet.

This article was originally published on OpenDemocracy.net