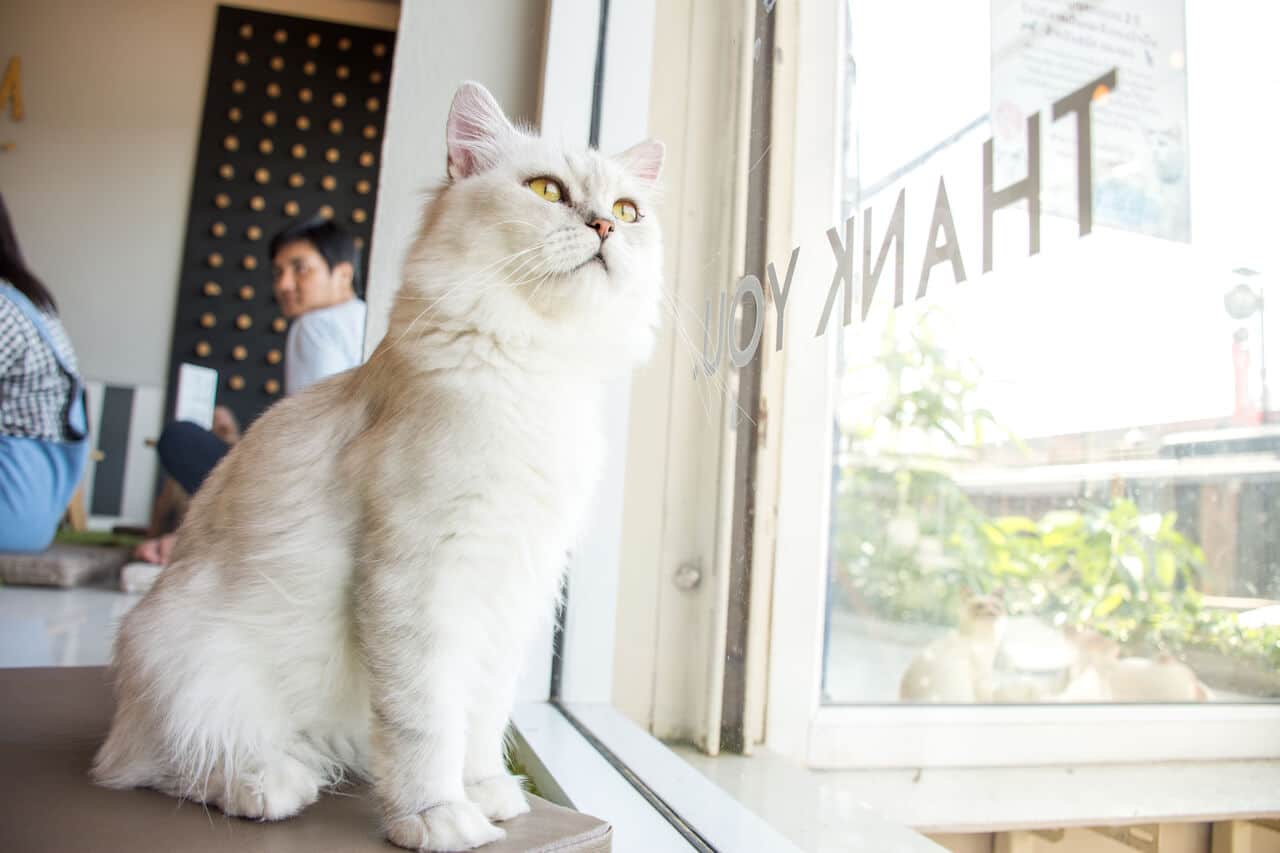 Cat Cafe Trend: Loneliness and Relaxation in a Time of Political and Economic Unrest

By Lorraine Plourde, Assistant Professor of Media, Society & the Arts and Anthropology at SUNY Purchase

After I began researching the explosion of ‘cat cafes’ in post-economic bubble Japan, I discovered an entire healing industry devoted to the commodification of intimacy.

Cats are the stars of our social media lives. Cat videos and cat memes are now common, if not clichéd, tools through which boredom and stress are managed and alleviated. They are celebrated by us in anthropomorphic terms as being alternately unruly, inscrutable, cute, and charming. These are the emotions that fuel an industry extending from Instagram and Facebook into the physical world.

You can see this most vividly in the explosion of ‘cat cafes’ throughout East Asia (most prominently in Japan) and now, worldwide. The first cat cafe opened in Taiwan in 1998, and they soon spread to Japan where the first cafe opened in Osaka in 2004, and one year later in Tokyo. Current numbers are a bit difficult to ascertain, but it is estimated that there are over roughly 40 of these cafes in the Tokyo metropolitan area.

Japan’s cat cafes are public spaces where customers pay by the hour to drink coffee (or sometimes alcohol), relax, read manga, and play with cats, or attempt to at least. These cafes are homely spaces, meant to evoke the experience of being in your apartment through the carefully staged use of furniture, lighting, reading materials, and background music. Not surprisingly, they are mostly concentrated in Japan’s urban centres, where a high percentage of people live alone. And they are only one choice among a range of themed outlets including maid cafes, music cafes, rabbit cafes, and owl cafes.

So why do people go to cat cafes?

I began conducting ethnographic research in Tokyo, where I spent time as a patron in a handful of cat cafes, conducted interviews and spoke informally with owners, employees, and customers. It is often suggested that people visit cat cafes because they are not able to own cats due to apartment regulations. But while this is the case for some, I gradually began to discover through my research that the rise of cat cafes is intimately tied to a vast ‘healing industry’, entirely dependent on the sense of loneliness and malaise that has come to the fore in post-economic bubble Japan.

This is a time in Japanese society when companionship (virtual or real) and intimacy itself have become highly marketable and desirable commodities. The healing industry became widespread in the early 1990s, with the collapse of Japan’s economic bubble in 1992, and then the annus horribilis of 1995 which included the Kobe earthquake and a sarin gas terrorist attack on the Tokyo subway.

Healing goods and services such as music, colour therapy, aromatherapy, robot interaction, and pet therapy became marketed as necessary tools for coping with economic and social anxieties that seemed to be intensifying.

And this desire for healing continues to resonate strongly in Japan today, in the wake of the 2011 Fukushima earthquake, tsunami, nuclear meltdown and ongoing economic stagnation.

People go to cat cafes to be healed – that’s the sentiment frequently repeated by patrons in cafe guestbook entries. Cafe owners, employees, customers, and advertising language all explicitly told me this as well. Cats are marketed as healing (iyashi, in Japanese) objects through which people can seek a sense of calm and relaxation. While cats are often represented as auspicious animals in Japanese folklore, this wasn’t mentioned by cafe workers or patrons. Instead, it was the cats’ perceived sense of unruliness and carefree nature that patrons told me was part of their charm and cuteness; a sense of uninhibited charm distinct from the more “obedient” – and implicitly, submissive – personalities of dogs. “Dogs are certainly more straightforward, whereas cats are more complicated and noncommittal,” a cafe employee told me.

One patron explained the healing qualities of cats in language that focused on their physical warmth and the visceral, pleasurable texture of their fur, telling me these qualities were comforting to him. And it’s not surprising that patrons would explain the healing dimensions of cats in relation to sensory qualities such as comfort and relaxation. Cafe owners work hard to create an ambiance that is highly domesticated but soft, comfortable, and gentle on all the senses. Some cafes provide soft fluffy blankets for patrons to use while lounging on the sofas, should they choose to take a nap – and it is not unusual to see people sleeping with a blanket covering them as if they are in their own bed at home. The cat is integral to the creation of this relaxed environment.

Most regular patrons are even led to believe that they have a connection with one specific cat: “their” cat. One customer told me that “his cat” happened to be the one that first approached him upon his initial visit to the cafe. He told me that he likes the feeling of caring for the cat when he visits the cafe.

The use of animals as a therapeutic means to relieve stress or provide physical and emotional support for their human companions is certainly not a unique practice limited to Japan – some recent American examples include service dogs used for Iraq and Afghanistan war veterans suffering from PTSD, and bringing puppies or kittens to college campuses during final exams. But the commodification and marketing of cats within cafes, however, suggest a very different engagement with animals than in the use of service pets to help overcome the traumas of war.

With the exception of one cafe I encountered during my fieldwork where the cats spent each night at an employee’s apartment so they would be “happy” at work the next day, cats normally sleep in cages inside the cafes overnight. They are also often referred to as “cat staff” (neko sutaffu, in Japanese) by the cafe’s human staff. While it might be tempting to dismiss “cat staff” as an ironic and cheeky anthropomorphism, a play on standard retail-speak, it’s important to recognize the very real effects of labor on the cats.

Their labor is monitored by cafe employees in all kinds of ways. Unproductive cats – those that are sleeping or sitting quietly away from patrons – are often made to be productive. The cafe manager watches carefully, knowing that patrons are paying for direct contact with cats. The first time I went to a cat cafe, the cafe employee noticed that there were no cats sitting near me so she promptly picked up a cat and plopped it in my lap, upon which it immediately leaped up and scrambled away. This scenario is not uncommon in cafes where the patron’s desire for consuming human-animal interaction is of the utmost importance. Cats are also sometimes placed “on vacation” (taken temporarily to a cafe employee’s apartment) or spend time in the break room inside the cafe: a space that is inaccessible to patrons. It’s worth noting that Japan’s animal rights movement is generally opposed to the cat cafe industry, arguing that the cats are overstimulated by the constant attention from patrons.

The labor performed by cats can be explained in terms of what political theorists Michael Hardt and Antonio Negri refer to as affective labor, which is a type of immaterial labor most visible in the service industries. Affective labor is immaterial, they argue, because its products are intangible: a feeling of calm, relaxation, and ease. The cats’ labor is material with very real effects (which are monitored and regulated by cafe employees), yet the products of their labor – feelings of healing and relaxation for the customers – are decidedly immaterial.

While both Japan’s cafes and the more recent global versions are advertised as public spaces for cat lovers to hang out with and interact with cats, the differences between the two models are quite stark.

One cafe owner that I interviewed told me that the cat cafe boom peaked in 2009, and yet the phenomenon appears to be continuing. Each year I return to Tokyo I notice new cat cafes that have opened up since my last visit. This phenomenon is getting renewed interest as cat cafes have begun to spread worldwide over the last few years. While both Japan’s cafes and the more recent global versions are advertised as public spaces for cat lovers to hang out with and interact with cats, the differences between the two models are quite stark. The biggest difference is that cat cafes in North America are tied to local cat shelters and all the cafe cats are available for adoption. In the case of Japan’s cafes, the cats come from a variety of backgrounds: breeders, pet shops, stray cats, kittens from an employee’s cats – and yet they live out their lives in the cafe. The phenomenon has not quite been around long enough to know what happens when cats get too old and perhaps are no longer seen as “healing.”

But while the cat cafe phenomenon is expanding worldwide, it is important to avoid explaining it as an exoticized example of Japanese culture. Instead, these cafes emerge as an effect of the post-industrial economy, in which customers seek to consume experiences that produce feelings and sensations. Japan’s cat cafes exist at a time in which social relationships have become increasingly commodified, privatized, and marketed to those who are able to afford it. They are spaces in which humans no longer encounter animals as companions, but as consumers seeking healing and relaxation, at a time of pervasive social and economic anxieties in Japan.