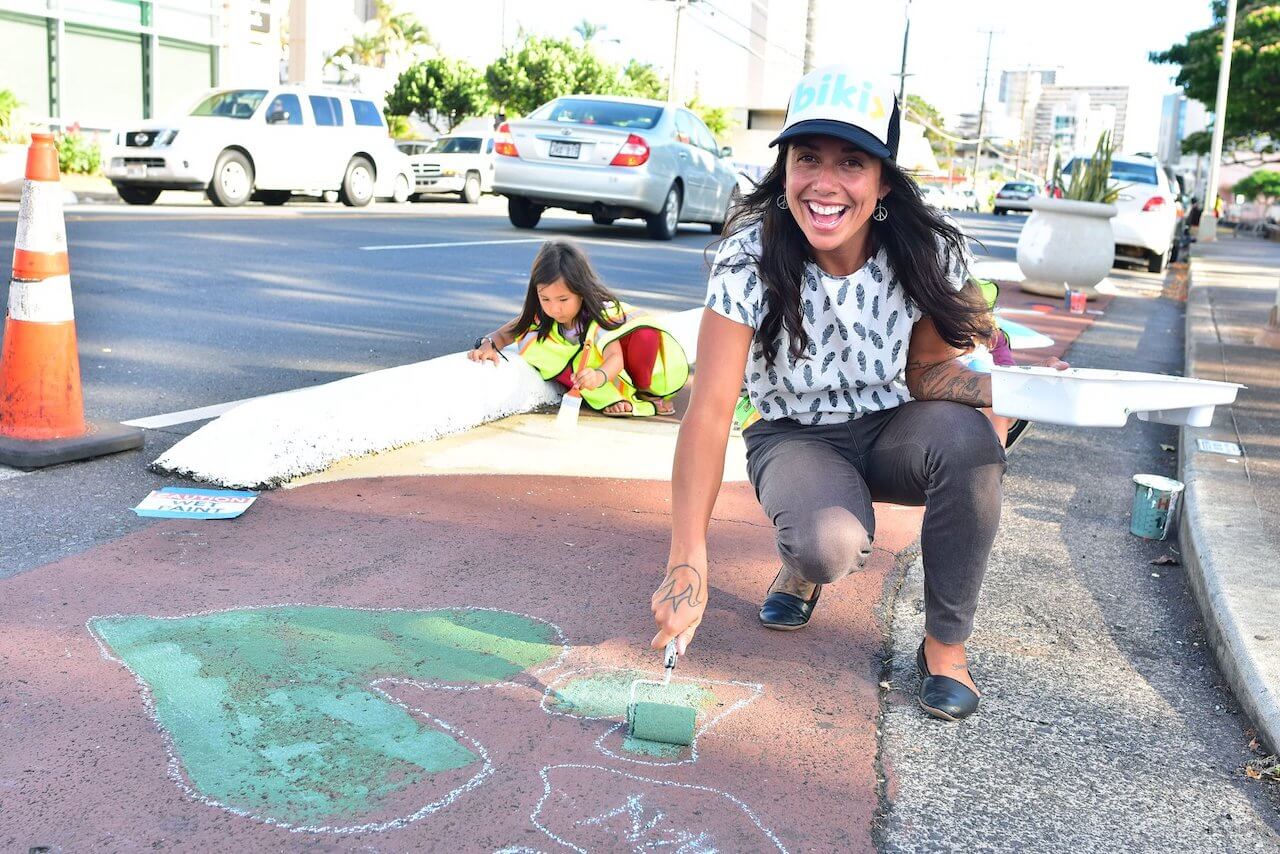 For the first time Blue Zones Project Hawaii and the community has come together on a street art project to revitalize not only the park, but the intersections and areas around it, while highlighting local history. In the Old Stadium Park in the Moiliili neighborhood of Honolulu, Hawaii, primitive caves known as Karst, wind deep under the surface. Filled with brackish blue-grey water that represents where the mountains meet the sea, the native fish that swim in the streams and the caves themselves are part of the history of this neighborhood.

Also, part of the local history are the kalo or taro leaves, which are a main staple food for the Hawaiian people in the area. These themes run through the new street art painting project at the main entrance to Old Stadium Park. 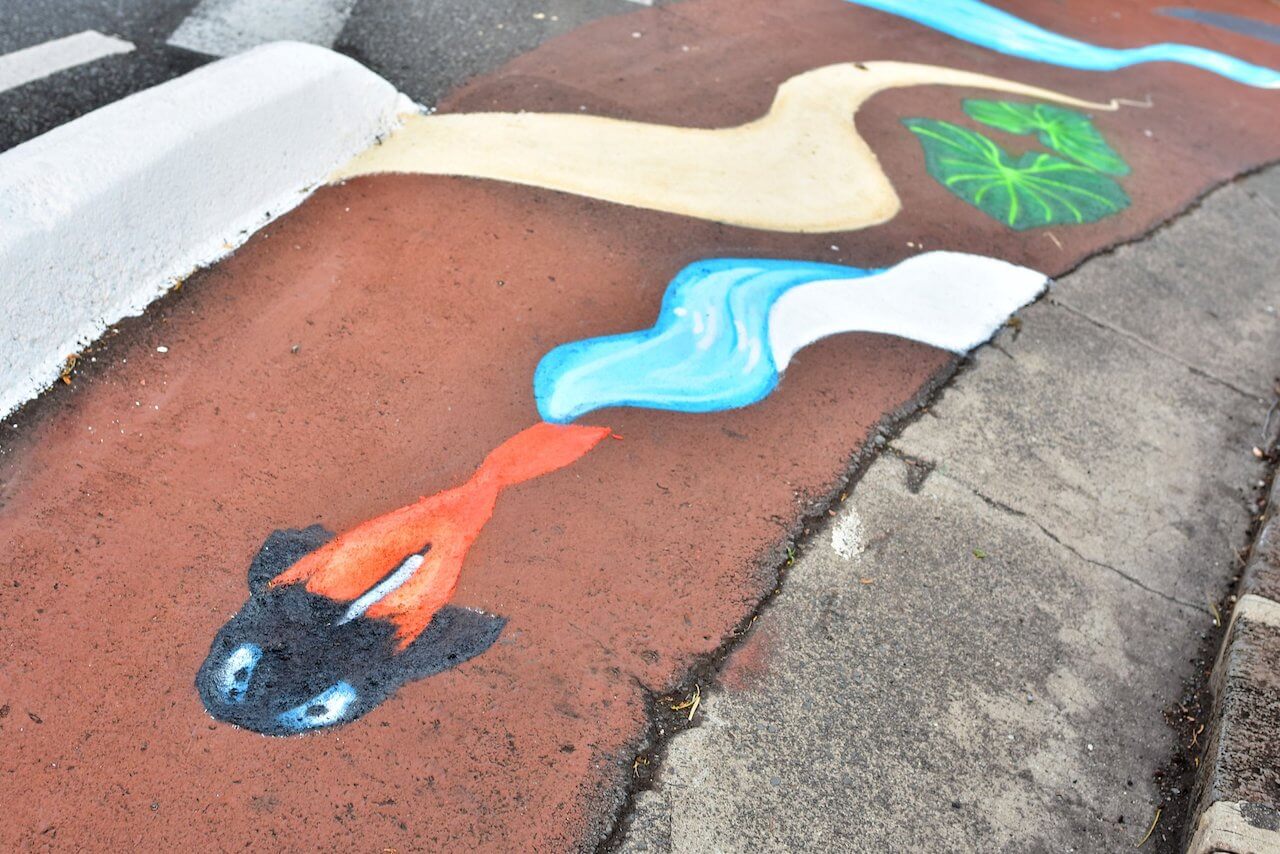 Pedestrian safety and traffic calming are goals of the bulb-out, or curb extension, painting project at the main entrance to the park, but there’s more to it than that.

“The project addresses many different things from safety, bringing people back to the park, and bringing history back,” said Colby Takeda, Blue Zones Project Hawaii community project manager. “We are also getting more foot traffic through the colors in the artwork on the bulb-out extensions.”

“The project is supported by the Safe Routes partnership that provides grant funding and technical assistance. We were one of the 12 communities to receive this award,” says Takeda.

Street Art to Slow Traffic and Beautify the Intersection

From 2007 to 2016, 67 traffic accidents occurred at the entrance to the park. The project was meant to address major concerns for pedestrian safety, while painting the bulb-outs was meant to slow traffic and beautify the space. 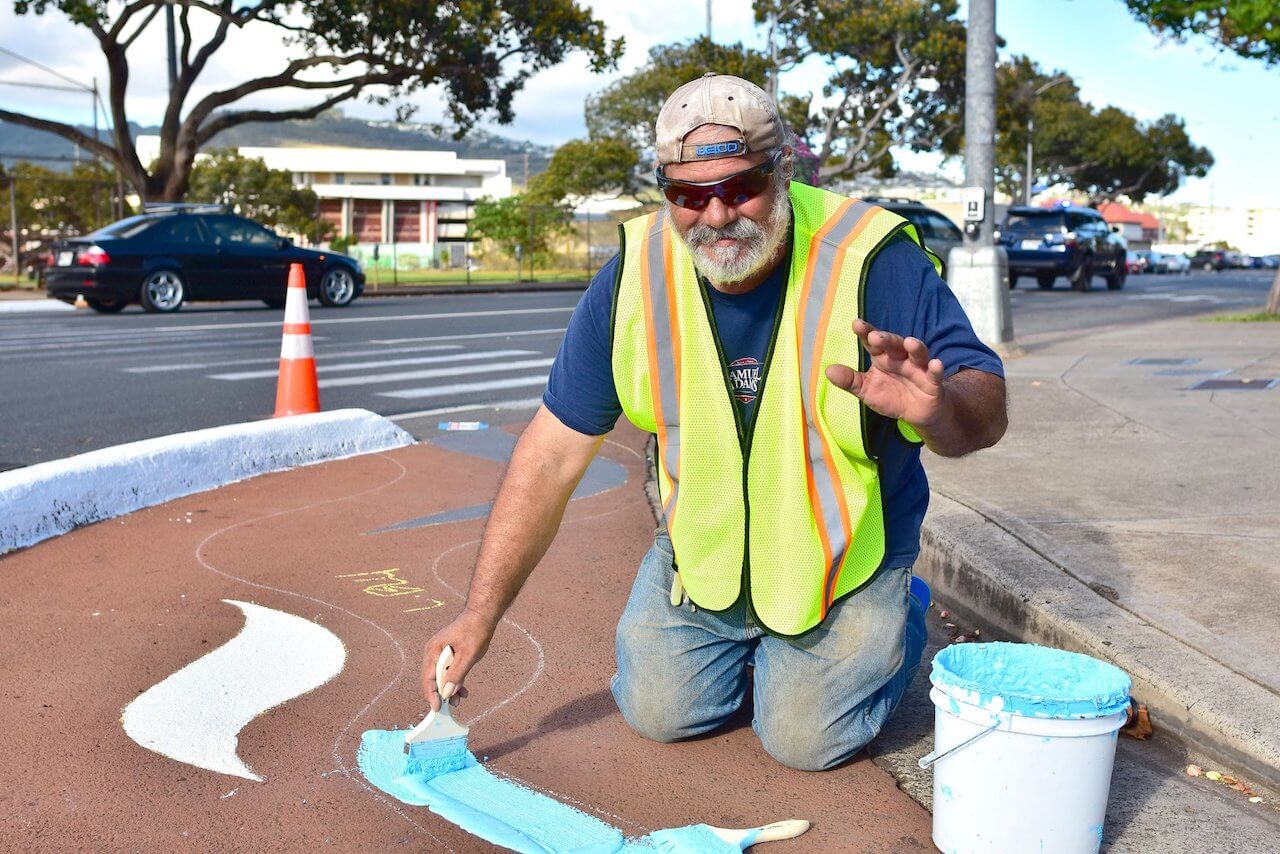 “Our work in the community in the Old Stadium park, Honolulu, is our community marquis project; every Blue Zones community chooses one. We’ve been working for about a year and a half in the park trying to revitalize it,” said Takeda. “It’s interesting to see how the community can come together to revitalize or reactivate it. We’ve been getting people to go to the park by doing different activities such as yoga and biking. We had several cleanups to restore the space. We’ve also brought different groups together to talk about the park and what it means to them and give their feedback. We got over 550 responses on a survey about what community residents want to see happen in this park. It’s an ongoing effort.”

In a weeklong project, over 80 people came to three days of workshops, where they talked about the history of Moliili, the benefits of traffic calming measures, urban tree canopies, and how art can be used for space making. Experts shared ideas. Community members talked about what they envisioned for the park space. They discussed whether more reflectors were needed, more arrows to point the way and show directions of where to go, or artwork.

Then it was put to a vote, and they decided on using art to create a safe space. The artist, Luke DeKneef, came on the third day and presented his ideas. He taught residents how to paint the different elements of the artwork, including how to work together on a painting project and how to paint the kalo leaves, fish and brackish waters of the Karsts. On the fourth day, the group painted the bulb-outs.

The first day, they also took photographs at the intersection where the bulb-out extensions were to be painted. Then we did a walking audit in relation to safety for pedestrians and access to the park. There was representation of community members, students from the University of Hawaii at Manoa, elementary, middle and high school students. There were organizations such as AARP, Trees for Honolulu’s Future, and others. Throughout, different groups were represented.

“It’s awesome to see people coming together and taking a stand,” said Takeda. “People would walk by and ask if they could help. They were able to jump in and paint with the group.”

In May 2019, the city council made a resolution for a master plan for the park and approved $250,000 to revitalize the park. 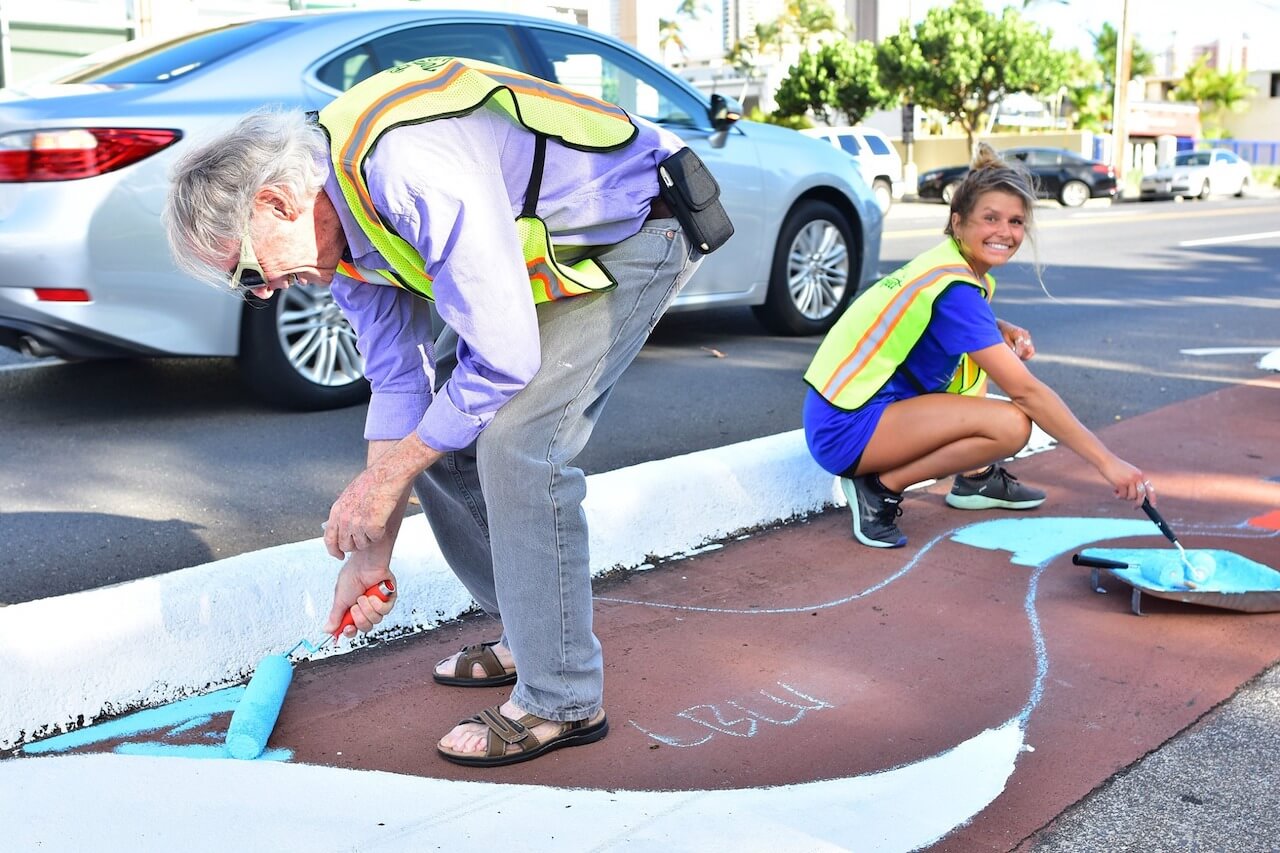 “I think it’s incredible that the city recognizes this has been a community-driven approach to looking at public spaces,” continued Takeda. “Unlike other projects in Hawaii that have brought in architects who presented their designs with no public input, this has been a community-driven project. The bulb out project has been very much alive with that. Different community groups, students and older adults have participated.”

In the agreement with the city, Blue Zones Project Hawaii adopted the intersection. To keep the paint on the bulb-outs looking fresh, volunteers will return and touch up the artwork periodically. The city will track speed to determine the efficacy of the painted bulb-outs by comparing current traffic speeds to previous data.

Speed-Reducing Art as a Traffic-Calming Tool

In the last few years, urban planners and traffic calming specialists have been using bright colors and eye-catching designs in crosswalks and other pedestrian areas. These street murals can successfully slow drivers, create a sense of community, and keep people safer.

Takeda points to traffic calming research as how they have determined how to use more elements to slow traffic in the area. Before the painting was complete, people would drive over the white bulb-outs. Color was used to bring attention to the space and to get more people to see those are areas for pedestrians, not drivers. Research has shown that traffic calming measures slow traffic and make intersections safer for everyone.

What’s next for BZP Hawaii?

The next step for this project is to paint the planters. Using input from community meetings, we will be painting above-ground trees, plants, animals and birds, to show the connection between what’s above the ground and what’s underground. The planters will also feature the people that live in the area.

The local Blue Zones Project team, working closely with the city, is interested in seeing how they can replicate this process through other community-led projects. They hope to help other communities figure out how to get volunteers, how much the paint costs, and where to buy supplies.

Once the city starts the master planning for the park, Blue Zones Project Hawaii’s efforts will build momentum and excitement around the project and drive interest toward the next steps.

“We are interested in Safe Routes to School Projects. Because this project is safe routes to parks, our schools are interested in doing studies and traffic counts,” concluded Takeda. “They want to measure how many people didn’t stop at the stop sign or were jay-walking. If we can use art to bring solutions to these spaces, then that may make way for similar projects in the schools. We had hurdles such as permits, where the team learned how the city works. The city is also learning from our processes.”