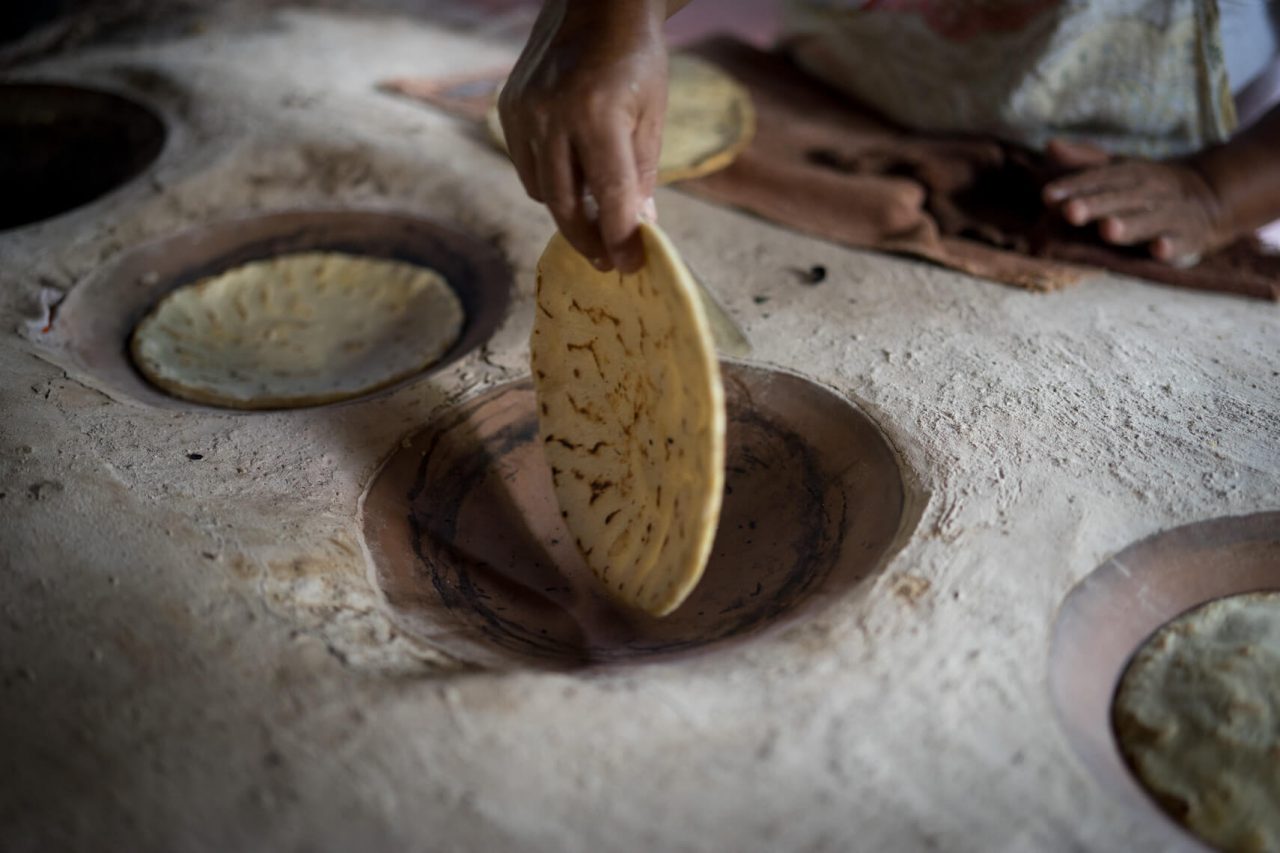 Jeff Gordinier had possibly the best food writing job in America. So what made him leave his post at the New York Times to spend four years trotting around the globe with the world’s best chef? He recently spoke to us about that decision, which led to the journey chronicled in his new book Hungry: Eating, Road-Tripping and Risking it All With the Greatest Chef in the World. It’s a fast-flowing, fascinating, funny, and touching tale of the big power of purpose and the sometimes painful process of re-orientating your life. It’s also a culinary adventure that involves insects, lots of foraging, and fermentation.

Saying Yes to the Greatest Chef in the World

The first and most obvious question we ask is how the story began.

Gordinier says: “It was the week after I moved out of the house that I lived in with my first wife and two older children. It was a time of great sadness for me, and I felt adrift—full of confusion and regret. Then I got an email from Rene Redzepi’s team asking if I wanted to meet him for coffee. Although I wanted to say no, I said yes, of course. I was doing my job, as he is a highly influential chef.” 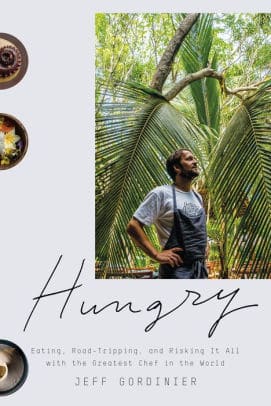 Redzepi is regularly written up as the greatest chef in the world, and is the founder and owner of Noma, the Copenhagen restaurant that was ranked “greatest restaurant in the world” four times. In Hungry, Gordinier describes his ambivalence as mostly personal: he was at a low point and was craving and eating NYC comfort food with lots of starch and warmth. The chilly-sounding New Nordic cuisine that Redzepi pioneered did not appeal.

He looks back at that moment as one of the great inflection points of his life, which he describes as one of those times that “we can say yes or no, and the fate of our future depends heavily on that answer.”

Hungry for Tacos and a Grand New Adventure

Gordinier met Redzepi at a coffeehouse in downtown Manhattan. Their conversation didn’t center around the expected talking points.

Instead, the acclaimed chef peppered Gordinier with questions and then suggested they take a trip to Mexico together. Gordinier remembers mostly his charisma: “He radiated a magnetism that you find in people like David Bowie or Prince, and be had this uncanny energy that can become contagious. He was also obsessed with tacos and kept saying that we should go to Mexico together.” That surprised him: Gordinier is from California, where tacos are a way of life; Redzepi is from Copenhagen, which was home to few (if any) traditional taquerias at that time.

What he didn’t know then was that Redzepi was also at a turning point in his life and career and was looking for inspiration. After 12 years of creating Noma, he was burnt out. The world’s most creative chef was feeling trapped by the weight of being named the world’s best.

Impossibly, Gordinier found an editor to fund his first trip to Mexico to accompany the chef on a breakneck search for the best local ingredients, flavors, and techniques. It was the first of many adventures he’d have with Redzepi—including trips to Norway, Australia, Denmark, and the Bronx. During this four-year period, he resigned from his influential post as food writer for the New York Times. His reputation meant he was hired, almost the same day, as the food and drinks editor for Esquire. It was a job that meant constant eating and travel, and it would give him the freedom and space to adventure and explore with Redzepi.

The Antidote to the Tedium of Modern Life

Gordinier reflects on those four years of his life: “Those four years changed my approach to life. I was in a place of gnawing on the past and mistakes that I had made, and this journey renewed a sense of purpose and hunger in me.

Frenzy and tedium are both a constant in most American lives, but when I traveled with the Noma team, I found the opposite. It was the antidote to the purposelessness and tedium of contemporary life. Everyone had their phones off and we were focused on the task at hand. I felt elevated being around them. When we were exploring the Yucatan for edible herbs and insects—everyone was alive to the moment. It’s rare to be around people who are so committed.”

Blue Zones research shows that lives that are longer and healthier tend to be lives marked by a sense of purpose. In Hungry, Gordinier writes: “The glow of some ultimate goal gave everything that sense of meaning that felt so comparatively elusive in the crushing grind of trying to stay afloat and serene in twenty-first-century America … Without an answer, even a manufactured one, life is a slog. With an answer, there is a unity of purpose that can focus the mind and energize the body.”

Food of the Future: Foraging, Fermentation, and Going Forward by Looking Back

Hungry is not a book about fancy food or restaurants. Gordinier takes pleasure in the fact that it transcends the synopsis: “It’s a book about a visionary thinker, and also a meditation on risk, reinvention, creativity, desire, and divorce.”

Redzepi is frequently described as a constant innovator, and someone who is hungry for change. During the four years of Hungry, the acclaimed chef shuts down his restaurant, full stop, to launch satellite Noma pop-ups in Japan, Australia, and Mexico. He then builds a 2.0 version on what looked like a ruin site when he first showed it off to Gordinier. His vision was that the new Noma must sit in the midst of its own urban farm, where they would grow their own vegetables.

Despite having a well-deserved reputation for constant reinvention and change, Noma is founded on a philosophy of “rustic, back-to-the-land resourcefulness.” Redzepi’s use of ancient techniques and his exploration of the culinary heritage of herbs, insects, and hyper-local ingredients launches modern cooking forward by looking back. He’s famous for foraging, and Noma even has an official Director of Fermentation. Redzepi’s work has reverberations from long ago, and Gordinier writes in Hungry about the team’s foray into Australia, “For forty thousand years the people who inhabited this continent had found ways to cook with what the landscape provided to them.”

Applying ancient wisdom to contemporary problems is part of the Blue Zones ethos. Blue zones regions, cultures that have produced the world’s healthiest, longest-lived people, have carried their culinary traditions into the modern era. Foraging, fermentation, nixtamalized tortillas, and other ancient techniques have never gone out of style.

Gordinier first wrote about his Mexican adventures with Redzepi for T Magazine, the style magazine of the New York Times, and initially just had fond feelings of it as a fun article. But then one day, an email lit up his screen as he sat at his desk at the Times. He had a reservation confirmation for a seat at Noma in just a few days. There were over 30,000 people on the waitlist of noma on any given day, so he thought it was a mistake. He texted Redzepi, who said he could take it or leave it.

He went online and booked the next cheap flight to Copenhagen. That was the start of the next chapter of his journey with Redzepi’s team, which eventually led to his momentous decision to leave the Times. It’s not hard to see why, as the story behind Hungry is not just a foodie story or a portrait of a genius chef. It’s a story about mission-driven leadership and recovering from divorce. It’s also an immigrant story: Redzepi is a Muslim immigrant from Macedonia, and his family faced a lot of bigotry in Copenhagen. His achievements are partly informed by his outsider status and drive. His team, made up of the best chefs in the world, hail from Brazil, Korea, Mexico, Ireland, China, and Japan. It’s a global team cooking together with the best Scandinavian ingredients.

When I asked him what’s next, it seems Gordinier mostly wants a little rest. His own journey meant a massive re-orientation: he gave birth to Hungry,  he has remarried, and he and his wife have toddler twins. He’s busier than ever as a husband and father to four kids, and he’s still one of the country’s preeminent food voices (read: Esquire’s Best New Restaurants in America).

He admits he eats everything in too much abundance and he’s zonked from flying all over the world. He loves walking but hasn’t gone for a walk in six months. He sounds ready to start the next chapter of his personal life, which he promises will include some Blue Zones-approved downshifting and movement every day. He also thinks his next chapter might be about saying No, since his Hungry journey was all about saying Yes.