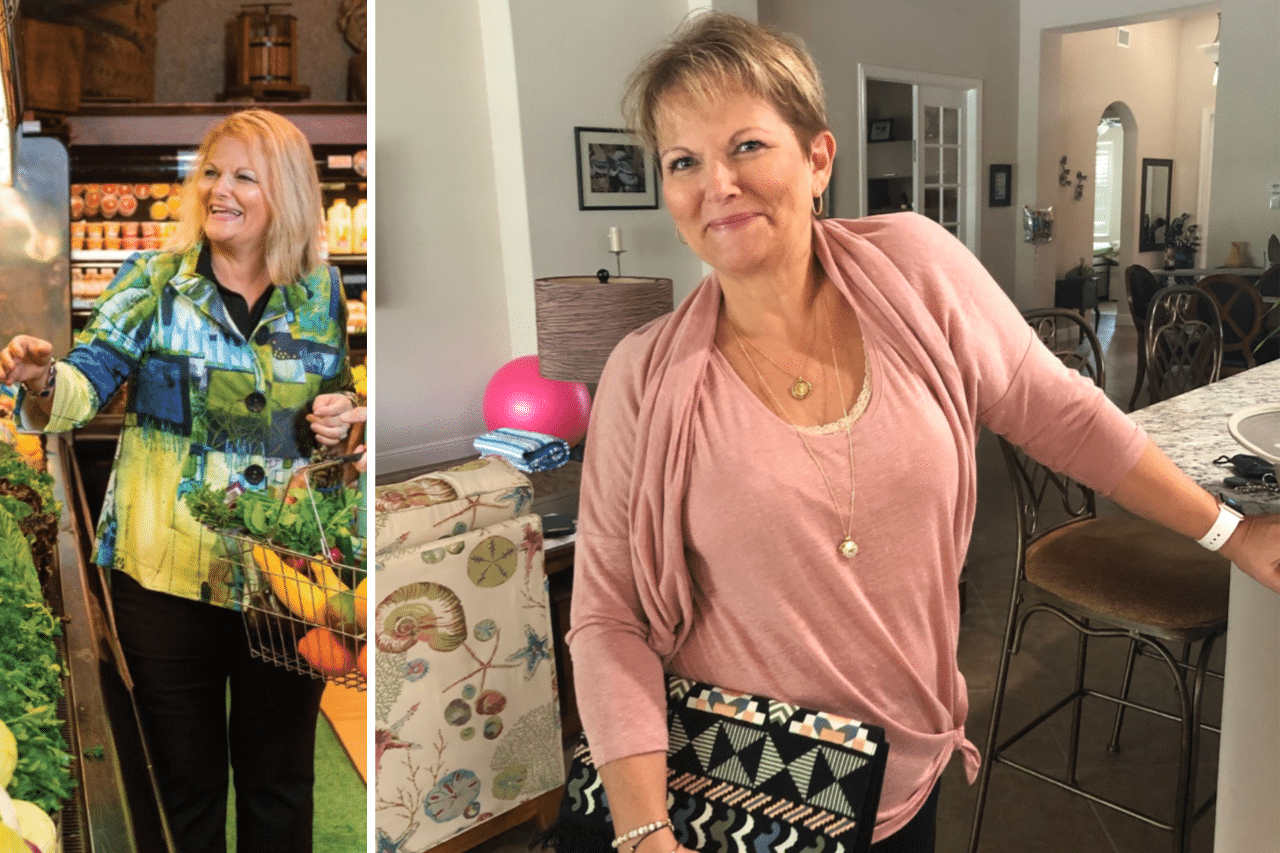 Since starting on her Blue Zones journey, Barbara Saxton has lost 25-plus pounds, three dress sizes, and significantly lowered her cholesterol.

Saxton and her husband began incorporating the Power 9 principles (lifestyle habits shared by the world’s longest-lived people) one at the time after first learning about Blue Zones in 2015. “Then we started thinking about how we could live longer, healthier lives. I wouldn’t say we were unhealthy at the time, but we’ve definitely made a huge change in the past five years. And it really started with the Blue Zones Project,” she said. Southwest Florida is taking part in Blue Zones Project, an innovative movement that works to make healthy choices easier for everyone by improving the places and spaces where we spend the most time.

Today, she and her husband love sharing videos, recipes, and information about Blue Zones and are recognized by others in Southwest Florida as unofficial Blue Zones ambassadors. The couple even started a blog focused on helping others “transition from a standard American diet to a whole-food, plant-based diet.”

Right around 2015, Barbara’s doctor recommended that she take statins for high cholesterol, which was around 240. Not wanting to take medication, the 59-year-old had asked, “Wait a minute. What about the conversation about diet and exercise?” Her doctor’s reply: good cholesterol wasn’t “sustainable” with diet and exercise. She refused to take statins, and instead decided to see what she could accomplish on her own. Five years later, she enthusiastically says, “My cholesterol went down significantly, below 200 for sure, and I’ve maintained that with the Blue Zones lifestyle.”

When looking at photos, Barbara said, “You can clearly see the difference in my face and just my overall look. You can really see the transformation from eating better, practicing better lifestyle habits, a big difference.”

“You can clearly see the difference in my face and just my overall look.”

In addition to losing 25 pounds, Barbara continues to lose around a pound a month without really trying. “It feels good because I’m not dieting. I eat all the time. We just eat completely whole, plant-based foods. We don’t eat any meat, no cheese, no dairy,” she said. “Pretty much anything that was a favorite food, from pasta dishes to chocolate pie, we just make a healthier version of it. And that has kept us on track so that we don’t feel deprived. That has worked out really well.”

“Pretty much anything that was a favorite food, from pasta dishes to chocolate pie, we just make a healthier version of it.”

In addition to switching to plant-based foods, Barbara and Doug also follow the hara hachi bu rule of walking away from the table when 80 percent full. “We don’t go back for seconds and we just don’t overeat,” she explains.

Last fall, the Saxtons participated in a a Potluck Moai project organized by Blue Zones founder Dan Buettner and NCH Healthcare system, sponsors of Blue Zones Project Southwest Florida. The moai group is now planning a Blue Zones-inspired trip abroad. Ten friends from “Best Potluck Moai” will travel to Sardinia, Italy, and Ikaria, Greece, with stops in Athens and Crete in June 2021. And although the trip isn’t entirely Blue Zones focused, everyone is looking forward to learning more about Blue Zones cultures and food on the journey.

Learning was a key focus of all the moai’s gatherings, so the trip makes total sense. “Our Potluck Moai was one of learning and education. One meal was all about the native fruit plants in the area and we took them home to make meals. The other was visiting a local Food Forest and learning about the sustainability of nature while enjoying fresh papayas. Our first moai was a cooking lesson on how to cook plant-based with everyone participating. So much was experienced in our five get-togethers.”

Being the Blue Zones veterans of the group, Barbara said she and Doug “were happy that we could share the principles with others, and we felt like we were good champions of Blue Zones with that group.”

Promoting Blue Zones at Work and Beyond

Barbara not only serves on several committees for the Blue Zones Project, but sometimes gets to promote Blue Zones at work. She’s an employee benefits consultant, who works with employers across the country to help them design customized employee benefit programs.

“We focus a lot on health and wellbeing in the workplace. And we do incorporate Blue Zones where we can. Some of our clients are even Blue Zones-approved organizations,” she said.

Outside of work, Barbara and Doug are approached often about Blue Zones, she said. “I believe that the two of us are kind of the ‘go-to people’ for Blue Zones here. People will see us in the store and say, ‘Oh, thank you for all the work you’ve done with the Blue Zones Project’ or ‘I need to talk to you about Blue Zones.’ If somebody says, ‘Blue Zones’ in our world, someone usually says, ‘Go talk to Doug and Barbara.’”