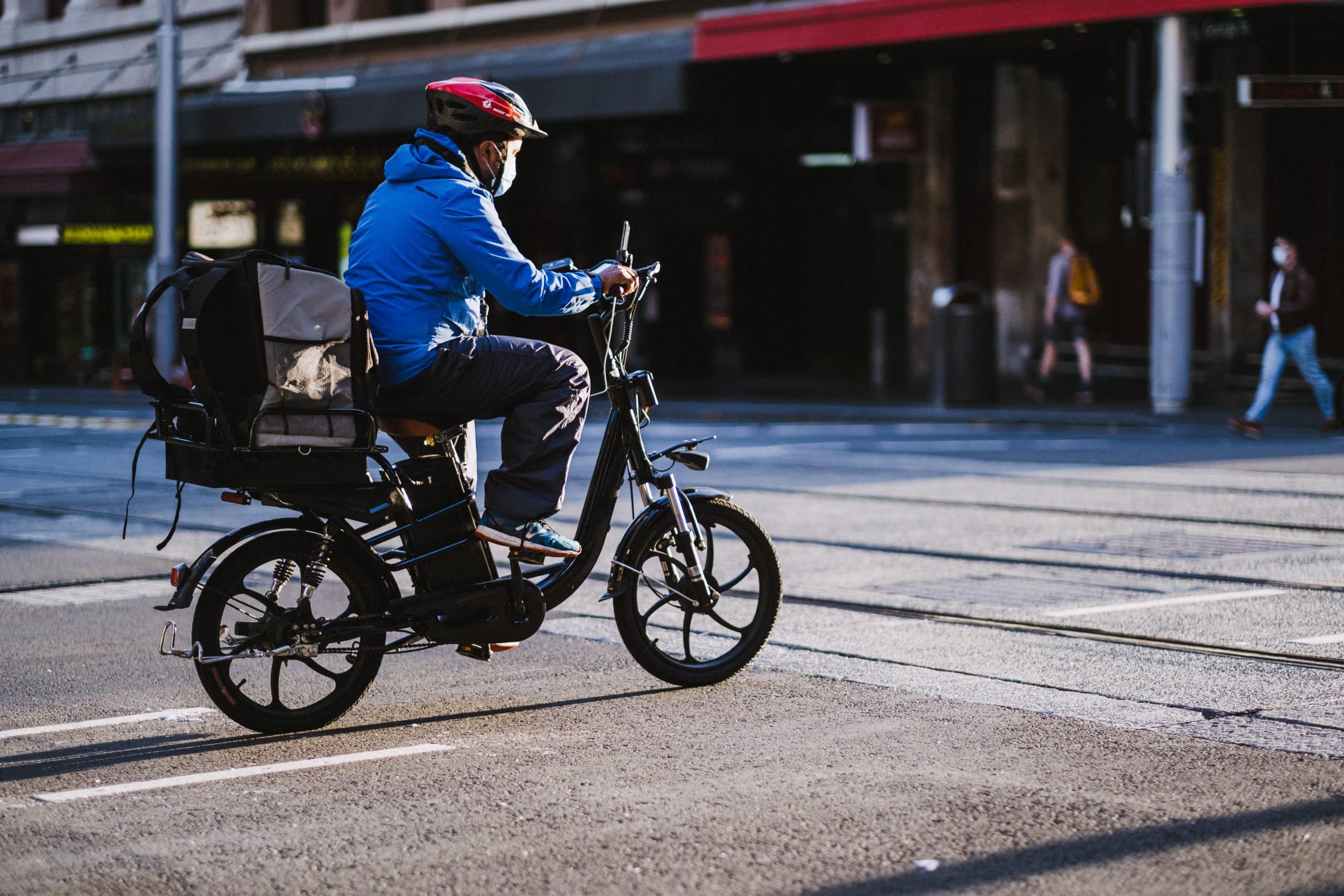 Bikes Lead the Way During this Pandemic and Other Crises

We are seeing a surge in bicycling during the global Coronavirus (COVID-19)  pandemic, especially in urban centers and major cities around the world. This is not a new phenomenon — in times of major catastrophes, bikes often shine as a practical form of transportation. The current crisis has exposed many of the vulnerabilities that exist in our systems and infrastructure, but it has also brought bikes to the forefront as a resilient and essential form of transportation.

As city streets emptied of cars and people avoid public transport to practice social distancing, walking and bicycling are suddenly the safest and easiest way to get around many neighborhoods and cities. In densely packed cities like NYC and Philadelphia, bike ridership has increased so much that city officials responded by closing some streets to cars and making them accessible only to pedestrians and bikes. Denver and Minneapolis soon followed suit, making many miles of streets for bikes and pedestrians only.

In Mexico City and Bogota, Colombia, city leaders added miles of temporary bike lanes to help reduce the spread of the virus. Bike-share companies in China are seeing longer and more frequent trips, Berlin rental bikes are free for 30 minutes a day, and a London electric bike company is providing electric bikes to NHS workers during the pandemic.

Some of these changes were implemented in incredible time, and other plans are still being tested and adjusted. Despite many emptier streets in the country’s most densely populated city, NYC’s mayor announced on April 5th that they suspended the Safe Streets pilot.

Is it Safe to Cycle During this Crisis?

Dan Burden, Blue Zones expert and the country’s most recognized authority on bikeability and walkability answers: “The short answer is YES. Biking is one of the safest things you can do during these challenging times. Biking and walking boost your immune system and are important for physical and mental health. The need for movement and stress relief is the same, and perhaps even more, during this pandemic.” Burden notes, “While almost half of the world is restricted somehow in their daily movements, we cannot afford the hit to our immune systems caused by inactivity and weight gain and stress.” The high rates of obesity and chronic disease in the United States put Americans at higher risk for severe illness from COVID-19.

Experts around the world agree. In many major cities across the U.S., elected officials and leaders have declared bike shops as essential services. This includes some of the country’s largest metropolitan areas including New York, San Francisco, and Los Angeles. A group of nearly 50 public health experts in the UK wrote an open letter to their government to recommend that cycling and walking be protected activities because of their importance to public health.

The German Federal Minister of Health recommended cycling as the healthiest form of transport for everyday trips. Dr. Robyn Gershon, a professor of epidemiology at New York University’s School of Public Health, said publicly that he supported walking and biking as the safest ways to get around, noting that: “If you have to travel, the outdoors is a way to really dilute anything that could be around you. The sunlight is also really good because it’s a natural disinfectant.”

*While walking and biking are great ways to stay active and reduce stress, some cities and states have decreed that it is only acceptable to walk or bike as transportation to essential services, not as a means for recreation. Check your local government websites and news outlets to understand the particular requirements in your city.

Follow CDC and WHO guidelines for biking safely during the COVID-19 pandemic, including:

Why Bikes Shine After Catastrophes and Crises

A surge in bicycling during and after disasters is not new, including during both world wars when fuel was rationed. After Japan’s 8.9 earthquake and tsunami in 2011, people relied on bicycles while damaged roads were packed with traffic and public transit was interrupted. The same thing happened after the 2010 earthquake in Haiti and after Hurricane Maria hit Puerto Rico in 2018.

In these times, bicycling offers an efficient, safe, and reliable way to get around when roads are blocked, fuel is in short supply, and/or public transit is shut down or unreliable. (Or, in this case, when you need to practice social distancing.) Bikes don’t need gas, you can travel far distances on them, and you can use them to transport goods or belongings, even on uneven or damaged terrain.

A different type of disaster, the Mideast oil crisis in the 1970s, helped transform life in the Netherlands. The country transformed their streets with a huge network of bike highways and bike lanes; now around two-thirds of trips in the Netherlands happen on bikes.

A Vision for the Future: Building Resilient Cities and Communities

The Built Environment team at Blue Zones has spent many decades working to build healthy, sustainable, and resilient communities. Building walkable and bikeable streets and cities are at the core of this work, as they would radically improve the health of everyone as well as reduce traffic and air pollution. The air is visibly clearer in many cities of the world right now as there are huge decreases in air pollution. Noise pollution in many cities has also decreased by as much as 30%.

Besides the environmental advantages, biking as transportation increases the health of riders and communities as a whole. Bikes are affordable compared to cars, and they open access for people in food deserts or opportunity deserts since you can go much further, faster on a bike than you can just by walking. And as we see right now and from history, bike infrastructure adds a layer of resilience to cities and towns as a flexible and effective means of transportation largely impervious to interruptions to public transit, natural disasters, fuel shortages, and blocked roads.

As cities around the world rush to add new bike infrastructure, the Blue Zones Built Environment team of experts see an opportunity in this crisis for cities all over the world to see the path forward to course correct and do things better in the future. Collectively, they have worked in all 50 states and in countries all over the world in over 4,000 communities of all sizes.

Blue Zones Director of Planning and Projects, Danielle Schaeffner, sees collective and personal lessons emerge: “Amidst the uncertainty, there are opportunities to reimagine and redistribute space in the public realm, to tend to, and listen to, our local communities, and to connect in the enjoyment of being on a bike or on foot.”

Mark Fenton, Blue Zones expert and Adjunct Associate Professor at the Tufts University Friedman School of Nutrition Science and Policy, remains cautiously optimistic that we will not drift back to pre-pandemic habits. He sees walkability and bikeability as central elements in the blueprint for creating a post-COVID-19 world that is “infectious disease resilient, climate resilient, chronic disease resilient, and economically robust with opportunities for healthy social interaction.”

Sarah Bowman, consultant to Blue Zones and the Director of Strategic Engagement & Impact for the Office of the Dean of Research at Trinity College Dublin says, “I hope what we all hope — that on the fronts of family activity, healthy behaviors, innovation, climate action, neighborliness, love, art, and spirituality — we don’t go back to what was so unhealthy for us and this planet. We want people to stay outside, to keep walking and cycling, to say hello and demonstrate care for themselves and others, and to be good neighbors.”

Dan Burden, Blue Zones Director of Innovation and Inspiration, believes we are at a turning point: “We are in a dream moment to gain the attention of many to provide guidance for maintaining health by being active walking and bicycling. We can help power up responsible walking and bicycling to build people’s immune systems, all while helping people make a permanent change from their sedentary lifestyles.” An Advertisement from 1918 during the Spanish Flu via Pearson