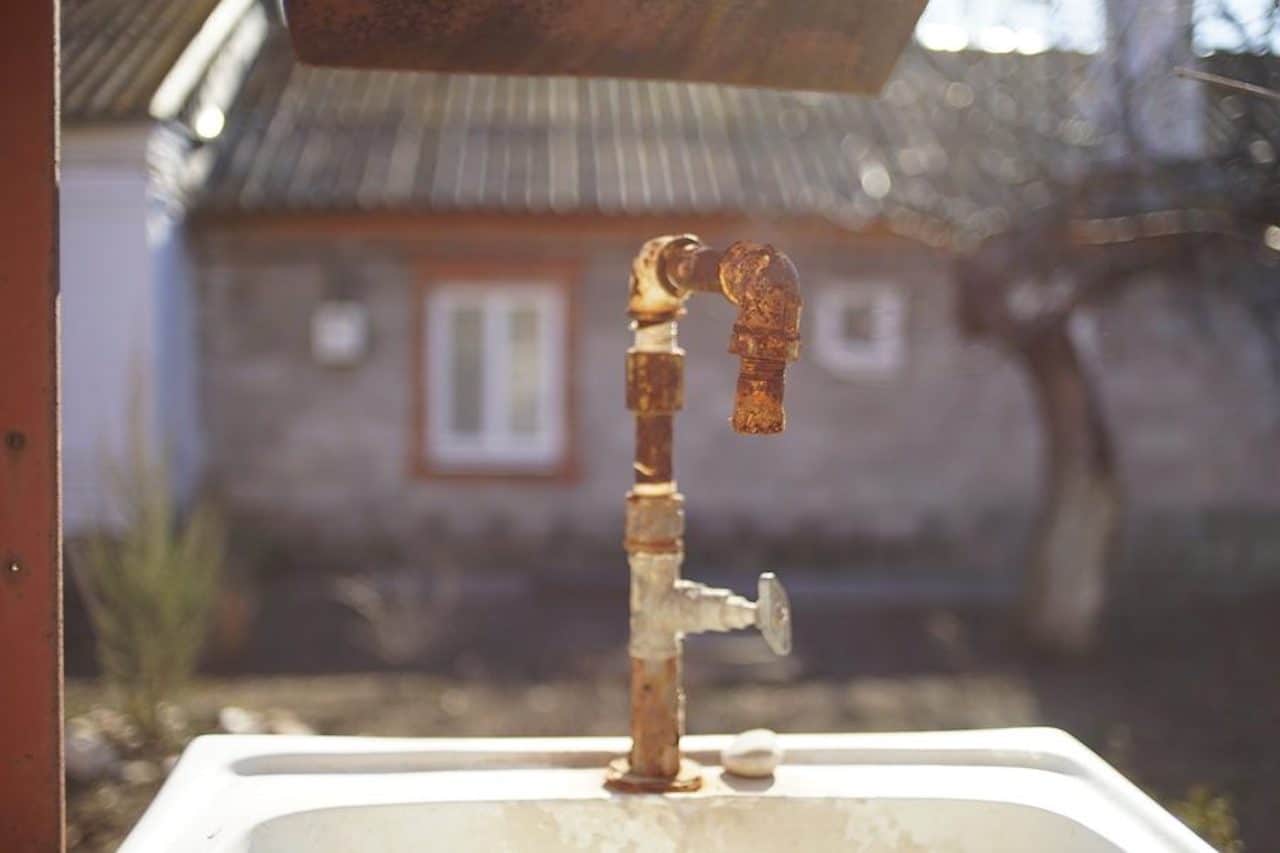 In nearly half a million American homes, washing hands to prevent COVID-19 isn’t as simple as soaping up and singing “Happy Birthday” twice while scrubbing.

In many of those homes, people can’t even turn on a faucet. There’s no running water.

In 470,000 dwellings in the United States — spread across every state and in most counties — inadequate plumbing is a problem, the starkest of several challenges that make it tougher for people to avoid infection.

That’s according to a Kaiser Health News analysis of data from the Census Bureau and the Housing Assistance Council in Washington, D.C. The analysis reveals other ways that inadequate housing in the United States puts people at risk during this pandemic. Nearly a million homes scattered across almost all counties don’t have complete kitchens, raising the risk of hunger and vulnerability to illness, even as people have been expected to eat all meals there amid stay-at-home orders. And over 4 million homes are overcrowded, with more than a person per room, making it nearly impossible to isolate the sick.

In fact, about 828,000 people have to deal with more than one of these housing problems.

“We assume this is happening in Third World places,” said Greg Carter, an assistant professor at the Indiana University School of Nursing. “But it’s happening here.”

Carter’s work takes him to southern Indiana’s Orange County, a community of just under 20,000 that, as of Sunday, had 113 confirmed COVID-19 cases and 18 deaths. It’s also one of 322 U.S. counties with rates of inadequate plumbing at least three times the national average of four homes in every 1,000.

Phil Mininger, construction manager for Habitat for Humanity there, said he knows a man in his early 70s who lives in a dilapidated house without running water or electricity. The man walks to a Walmart about a half a mile away to use the bathroom and wash his hands.

Conditions like these also occur in states such as Colorado, Alaska, and New York wherever plumbing is absent or in disrepair or water has been shut off.

Percentages are twice as high in rural areas overall, but similar conditions can be found in urban centers, too. Just under half a percent of dwellings in New York City have inadequate plumbing, for example, but that’s still about 14,000 homes.

Public health experts say substandard housing reflects vast socioeconomic inequities that make America a breeding ground for the coronavirus. Poverty, and the poor health that goes with it, fuel the spread and raise the likelihood of dying from COVID-19, both in places the disease already has hit hard and those it’s just reaching.

“The discrepancies between those with privilege and those without, they existed before our pandemic. What happens after?” asked Jessica Hanson, an assistant professor of community and behavioral health at the University of Minnesota-Duluth. “I hope when this is done, we as a community and as a society recognize there are people who don’t have access to what they need. And that has to be addressed.”

The discrepancies between those with privilege and those without, they existed before our pandemic. What happens after? —Jessica Hanson, @CEHSP Click To Tweet

Facing The Virus Without Running Water

The federal government made huge public health gains in the early- to mid-20th century by spending heavily on water infrastructure. The result was healthier people who lived significantly longer. But that changed in the 1980s, according to a 2019 report by the US Water Alliance, Dig Deep, and Michigan State University researchers. From 1977 to 2014, another report said, federal spending on water infrastructure dropped from $76 to $11 per person in inflation-adjusted dollars. Local and state spending rose but didn’t come close to meeting the need.

Then the COVID pandemic struck.

Nick Slim, tribal council administrator in the remote Yup’ik Eskimo village of Kipnuk, about 500 miles west of Anchorage, said people there have been “doing the best we can” to follow hand-washing advice, but it can be a struggle. They have no piped water; he and the other 650 residents depend on hauling ice and collecting rain.

“We’re all concerned about the virus,” Slim said.

Just over a third of homes in the Bethel Census Area of Alaska have inadequate plumbing, the nation’s second-highest rate behind the adjacent Yukon-Koyukuk Census Area.

According to state officials, most Alaska homes without running water and flush toilets are in Native Alaskan villages either not served by water utilities, or in places where water must be hauled or that have aging and deteriorating piped systems. Compared with the overall U.S. population, KHN found, Native Americans are eight times more likely to lack sufficient plumbing in their homes.

In the absence of running water, respiratory illness festers. Rates of invasive pneumococcal disease in southwestern Alaska are among the highest in the world.

Still, Alaska has had fewer confirmed cases of COVID-19 than many other states, with 381 through Sunday. But a University of Texas study said that if a county has just one case of COVID-19, there is a 51% chance that an outbreak is underway.

Gunnison County, Colorado, has already been hit hard by the coronavirus, with 173 confirmed cases through Sunday and six deaths among just over 17,000 people. That gives the county, known for the Crested Butte ski resort, one of the highest case rates in its state. It also has one of Colorado’s highest rates of inadequate plumbing — about 1 in 45 homes. It’s a place of housing extremes, with the median owner-occupied home costing $339,000, and some mobile homes going for a tenth of that.

Loren Ahonen, a program administrator with the Gunnison Valley Regional Housing Authority, recalled a mobile home with an unrepaired frozen water line. Water was restored about a week after county residents were told to stay home amid the pandemic, he said. But until then, he said, tenants relied on 5-gallon jugs of water from the grocery store, neighbors, and good Samaritans.

As in many other communities, Ahonen said, all utilities in Gunnison County have suspended shut-offs for nonpayment during the pandemic. But emergency water shut-offs are still happening when leaks arise, as he noticed recently when he drove through a mobile home park prone to water problems.

Raising The Risk Of Disease

Such issues compound another perennial issue in mobile homes: overcrowding. Ahonen said he’s seen up to six people squeeze into a small home. A “social distancing index” created by the Colorado Health Institute found that 1 in 20 homes in a Gunnison County census tract were overcrowded.

Crowded housing is also a big issue in urban areas, and has been linked to higher rates of COVID-19. An analysis of New York City cases by the New York University Furman Center found that the ZIP codes with the highest rates of positive cases had more than twice the rate of renters living in overcrowded conditions as those with the lowest rates.

Pascual Peña, 33, an aide to a New York City council member, said he and seven family members are packed into a small, four-bedroom apartment in the Manhattan neighborhood of Washington Heights.

Recently, his parents and sister developed COVID-19 symptoms, he said, and “it was difficult with so many people to separate each other.” Peña said he spent most of his time in the kitchen, while his father stayed in a bedroom, his mother in the living room, and his sister in her room. Everyone shares the bathroom, cleans constantly, and hopes the virus won’t spread further.

Indiana University’s Carter said people living in unhealthy housing conditions are often older or suffer from chronic disease, further raising their risk of becoming seriously ill with COVID-19. Carter recalled a woman with diabetes who lived in an Orange County home buzzing with fruit flies, where meat rotted in a dilapidated refrigerator.

While Carter and his team were able to help her, aid is harder to come by these days, with many outreach programs on pause. Arranging repairs has been complicated by social distancing rules.

As the pandemic and its accompanying economic crisis continue, public health experts worry that people living in substandard housing may spiral further downward — especially since housing is usually just one of their challenges. They may have lost low-wage jobs to COVID-19. Or they may lack medical care, steady food or other ingredients of a healthy life.

“We’re going to see them experience a greater lack of access to these things,” Carter said. “People were already dying of poverty.”

Carter and other experts said policymakers, and society as a whole, must focus more on housing and health disparities. Pandemic or not, no one in America should live without the basics of indoor plumbing, said Lance George, research director for the nonprofit Housing Assistance Council, which helps build homes across rural America.

Pandemic or not, no one in America should live without the basics of indoor plumbing. — Lance George, research director for the nonprofit Housing Assistance Council Click To Tweet

“This is 2020,” George said. “These are problems that should’ve been solved.”

For estimates of households in the United States that do not have adequate plumbing or adequate kitchens or are overcrowded, KHN analyzed data from the American Community Survey (ACS) five-year estimates (2014-18), specifically the Integrated Public Use Microdata Series (IPUMS) provided by the University of Minnesota. This data provides demographic data on individual members in each household. KHN excluded those living in group quarters.

To compare rural and non-rural areas, KHN used data from the Housing Assistance Council, which coded census tracts as rural, urban, or exurban/suburban and provided household estimates by census tract for inadequate plumbing and kitchens, based on ACS five-year estimates (2013-17).

Laura Ungar, Midwest Editor/Correspondent, covers health issues out of Kaiser Health News’ St. Louis office. She has been a journalist for nearly three decades, including for The (Louisville) Courier-Journal, USA Today, the Hartford Courant in Connecticut and The News Journal in Delaware. She has covered health for more than half her career, writing about issues ranging from cancer disparities to lead in water to the largest HIV outbreak in rural America.

Elizabeth Lucas, Data Editor, specializes in data analysis and reporting for the KHN enterprise team. She came from Investigative Reporters and Editors (IRE), where she spent four years training and supporting data journalists around the world as the NICAR Data Library director. Previously she worked as a data reporter on health and the environment for the Center for Public Integrity. She has a master’s degree from the Missouri School of Journalism.