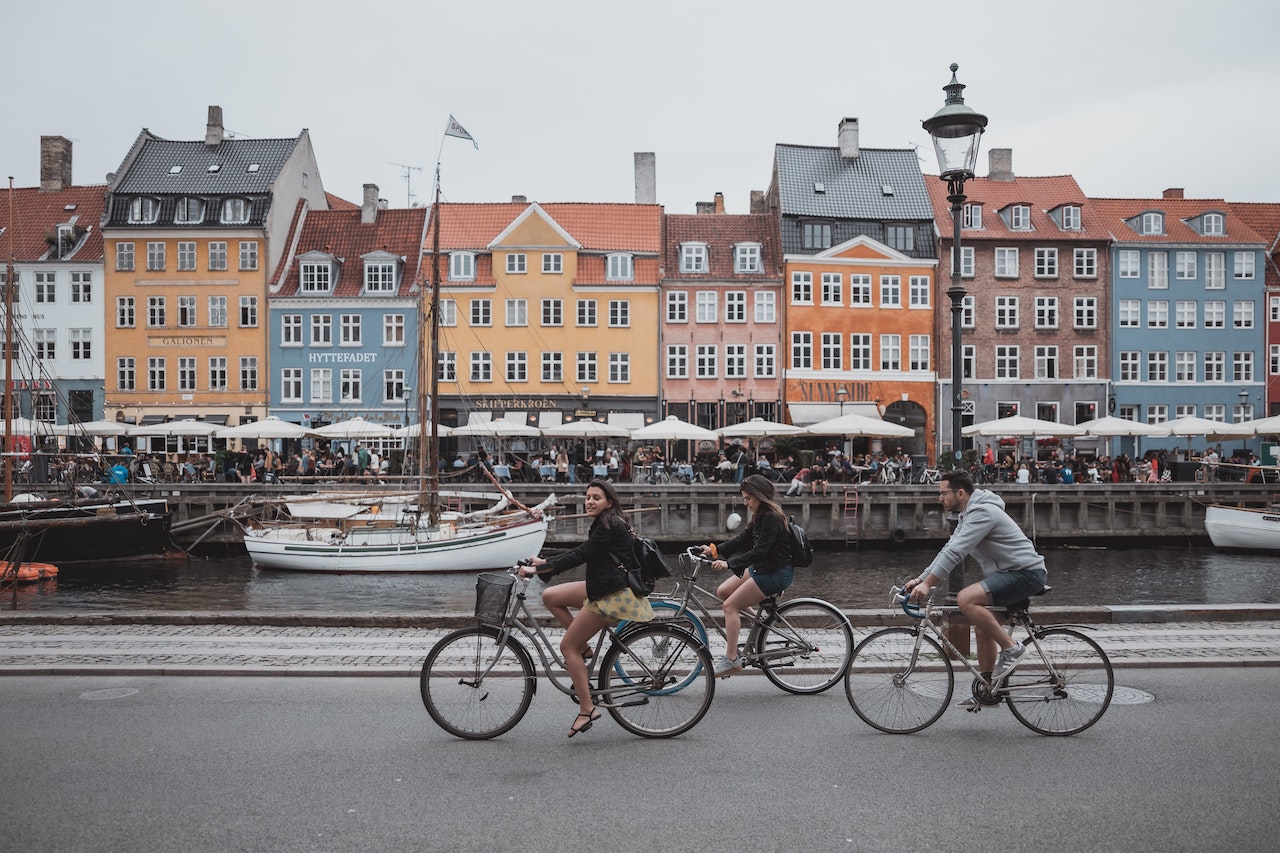 Denmark’s Duel with COVID-19: Happiness, Civility, and Perhaps a Safe Return to School

[Editor’s Note: Blue Zones Founder Dan Buettner calls Remar Sutton “my mentor and Life Virtuoso” and he has been a background figure in much of Blue Zones research and work in Denmark. For many years, Remar has spent part of the year in his home in the historic village of Lejre. We asked Remar to report for us over the coming months from Denmark.]

Denmark! For seventeen years I’ve spent my summers here in a 300-year-old thatched-roof cottage near a thousand-year-old village called Lejre (rhymes with tire). An ancient forest borders rolling hills surrounding my home. Dozens of close friends and extended family members actually helped rehabilitate my cottage and garden, built the pebbled walkways, and visit often, always so welcome. Pheasants, deer, and too many moles stop by, too. I’m a lucky guy.

Over the years, hundreds of other Danish friends from all walks of life have joined me around my stone-lined fire pit for dinner and conversation. Many Blue Zones gatherings have happened here, too. My Blue Zones life in Denmark is anchored—literally—to my cottage. Dan Buettner, Jr, now a member of the Blue Zones team, laid my knotty pine kitchen floor when he was a teenager.

And what has Blue Zones observed about Denmark over the years? If you want to be happy, live long, and stay healthy, this country is a good place to be. Denmark finishes near the top in most quality-of-life categories.

And if you’re a Dane over 65, you’re living in the happiest place in the world.[1] One of these days I’ll write about that since I’m 79. But not today.

Right now, I want to tell you the story of the Danes and their duel with coronavirus. There may be something to learn here. The Kingdom of Denmark in early August 2020 had about a sixth as many cases as the United States per 100,000 people.[2] They were one of the first countries to re-open schools in the Spring with special measures to ensure small classes, physical distancing, and outdoor instruction. Uniform policies for all schools nationwide, relentless testing—and financial assistance for all schools has also made their school policy work so far. And Denmark has been able to remain civil and positive through all this lockdown and economic and emotional stress.

How have they done that? I’ve been asking academics and statisticians, family, friends, neighbors.

Upfront: there is no magic bullet in this story. It is the execution of the obvious that has worked in Denmark. And this is not a scientific paper. It is a story in the words of everyday Danes.

The End Result: The Danish Government reacted quickly, with one voice, to COVID-19.

This should be easy, right? But Denmark has at least 10 active political parties from supporters of the Danish Monarchy to communists, who march out of Parliament when the Queen enters for her yearly speech. Yet, despite their differences, all Danish leaders treated the threat of the virus seriously from day one. Ten different parties came together to create a single plan and then to support it with one voice. Here’s the timeline.

On January 30th the World Health Organization (WHO) declared the Coronavirus the highest level of public health emergency. Denmark took note, and most Danes began catching snippets of an unknown stalker.[3]

On February 27th, Denmark recorded its first Coronavirus case. Two weeks after that case, the Danish Parliament vigorously debated the virus and voted: all parties voted to support special laws to control the spread of the virus. Amazing. A parliament with a combative ten parties had now agreed on one approach to COVID-19 before one Danish death.

That clear decision happened because compromise and consensus are woven into the Danish psyche. A cookie-baking club can debate endlessly on cookie-baking club procedures. Political parties—even the smallest ones—can have vibrant kids’ programs that encourage the young to understand the Danish political and decision-making process. Discussion and disagreement aren’t always a cause for bitterness and division in this country.

To launch the plan immediately, the Government announced that Prime Minister Mette Frederiksen was to make an address to the nation of “major importance.”

Anders Weber and his neighbors were watching their kids play on the quiet lane fronting their home in Copenhagen when the announcement was made, a sunny and warm March 12th. “Sunny and warm” is a rare phrase for Denmark in March, just like the government message that passed quickly between the parents. “The parents joked we should all head to the grocery store,” Anders said. They did.

In historic Aarhus, Martin Ritter was in his hand-crafted, converted railroad car with his partner when he heard the message about the speech. Martin is a contrarian, student, and entrepreneur. He’d been tracking the virus, reading scientific papers on it. “For the first time in my life, I had an anxiety attack,” he remembers. “I was really nervous about how this would hit my family, the country. It was like being attacked by a zombie nation.”

Most Danes tuned into this broadcast. The message they heard was very simple—and virtually all Danes accepted that message. That’s the key here.

“Danes have an innate trust in the people running our government,” Anders says. Anders has advised Blue Zones before. He has an easy, shy smile that masks a stiletto-sharp brain. “We feel socially equal. The distance between people in power and the people is not that big. If the government says something important that we may not understand, we will trust the government.”

Most Danes learned that lesson by osmosis over the years. “I think back when I was a kid,” Anders, 42, says. “I don’t believe anybody ever told me that you can trust the government. I sensed it from the adults around me.”

Martin Ritter felt that, too. “We can’t always wait for the science to prove everything.” And Ritter is one of those reading all the science.

So, what was the Prime Minister’s core message? Lockdown. Just two weeks after their first case, and before any deaths, Denmark became the second country in the world to enter a virtually complete lockdown. The first country was Italy, two days earlier. Italy already had over 7,300 cases and 366 deaths.[4]

“We will stand together to stand apart,” is how Anders remembers it. Social distancing would be weapon one in the Danish arsenal.

“The Prime Minister made a moral speech,” Anders said, a phrase that echoes around conversations here. “She said, ‘This is a virus that spreads vastly, experts don’t have that many tools to control it, so not to make it worse, we have to do this together. We are doing this to take care of each other.’”

This is a virus that spreads vastly, experts don’t have that many tools to control it, so not to make it worse, we have to do this together. We are doing this to take care of each other. —@Statsmin Click To Tweet

Peter Gundelach, an internationally respected sociologist, for decades known for his work on European values, said it this way. “If a person in power speaks clearly, we will listen; it’s almost a consensus. We see the government as a friend; someone that is going to help us.”

“We were following one person, not ten,” added Martin Ritter.

But don’t think we’re talking about automatons. Many people questioned the lockdown, many didn’t understand it. But they put their feelings aside and accepted it “for the common good.” A phrase you also hear a lot in Denmark.

Denmark was a ghost country starting March 12th, four days before the lockdown officially started. And if Danes saw people disrespecting the common good? Most said something, respectfully.

Then on March 17th, a 57-year tradition was broken when the Queen of Denmark made a national address. Kings and queens in Denmark have always been involved with the people and often attend important local events. But a national address occurs only on New Year’s Day. The sole exception took place in 1945 at the end of World War II. So, people tuned in.

“Our Danish royal family is never political, never had corruption or scandal. To bring out the Queen to do a message was brilliant communication,” says Anders.

Many who don’t support the monarchy saw the significance of her address, including Peter Gundelach. Peter is a staunch republican whose feathers ruffled a bit when I asked about the impact of the Queen’s address. But after a pause, he remembers seeing it. “It was interesting. Her speech was mainly moral support. We will behave decently to each other in this situation. We will take care of each other.”

So, what did the government and the Queen tell people to do, in detail? Simple.

...wear a mask if you are around people outside your family circle. —Remar Sutton, Blue Zones Speaker Click To Tweet

Also, at the bottom of the worry list: not a Dane was concerned about medical care if they should contract the virus. Universal health care here isn’t perfect, but it works. Income support when you’re out of work is universal, too, and businesses received limited support, too.

How did the Danes communicate the government’s messaging?

Ask any Dane, and without thinking, that person will recite the Danish recommendations, invariably rubbing their hands together when they mention handwashing. Even young children easily share the steps.

The messaging, from the day of the Prime Minister’s address, has been uniform—even down to the type font used on all signage. It is omnipresent. Few words are used. The illustrations for each recommendation are simple and uniform. [6]

And the messaging has worked, even though the lockdown was tough on nearly everyone and virtually every business.

But the scary thing for me, the outsider, is now. The lockdown has eased and even though distancing and cleanliness are still the rule, they are not the norm anymore. Particularly among the young. The Prime Minister is now regularly commenting on this. And now masks are required—not suggested—on public transportation.

A bit of clarity and unity can happen even in a very complex society.

That’s a pretty good aspiration for all of us, isn’t it?

[5] WHO’s recommendations concerning masks. This is their latest take which is still generally the Danish mask policy: file:///C:/Users/remar/AppData/Local/Temp/WHO-2019-nCov-IPC_Masks-2020.4-eng.pdf