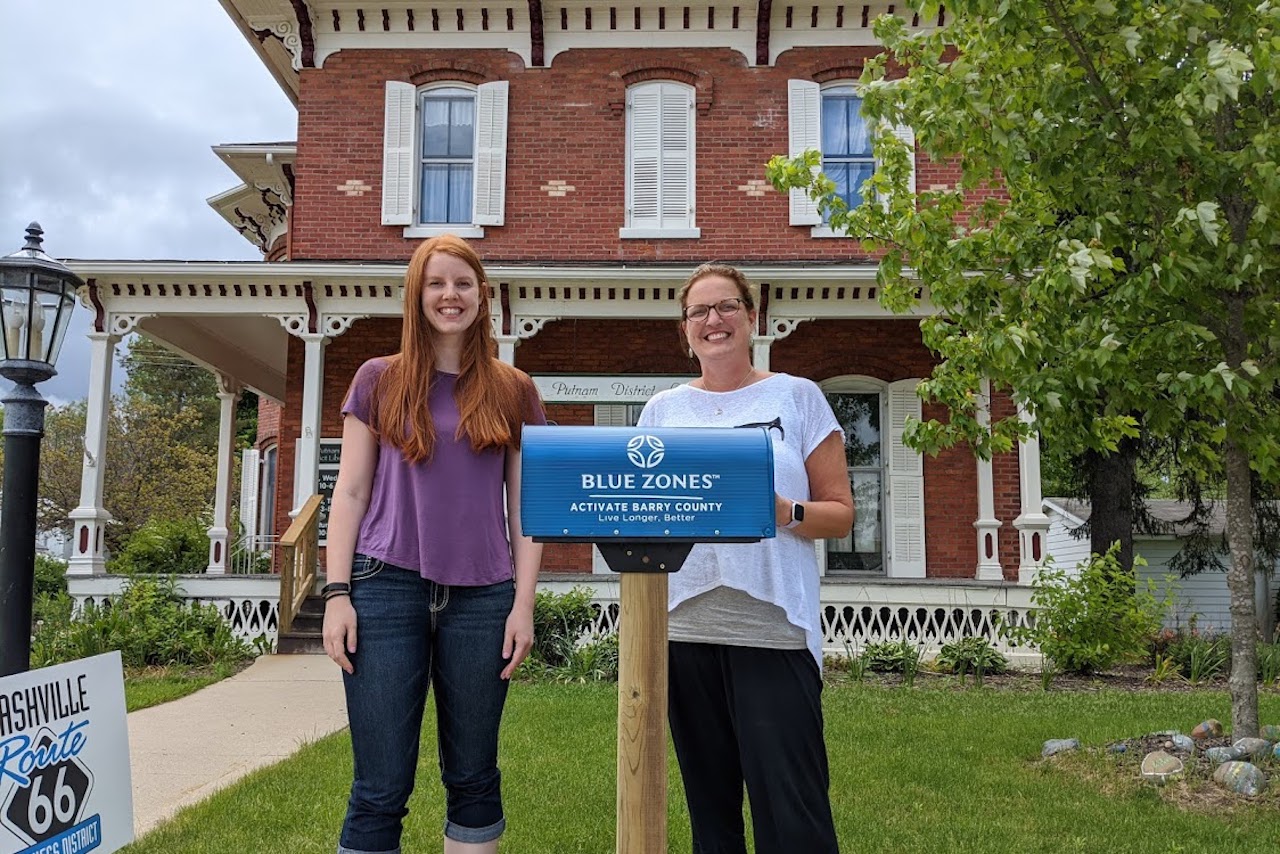 When COVID-19 precautions first went into effect in Barry County, Michigan, Blue Zones Activate Barry County was just transitioning into the community and it was unclear how the pandemic would impact the program. However, with a little creativity and a lot of collaboration among community organizations, the program continues to stay on track with its plan to improve health and promote better nutrition in the community.

Barry County is the very first Blue Zones Activate program to launch. It’s a three-year program that will create a ripe foundation to move forward into a full community Blue Zones Project. “We had just formed our governance structure and completed our initial reports. We had started to set up groups of volunteers and then basically the world shut down. So, we were really looking for ways to stay relevant and to let the community know that we were still actively moving forward and that we weren’t taking a pause amid all that was happening. Of course, there are some limitations when buildings aren’t open, and people have to shelter in place for several months.”

We had started to set up groups of volunteers and then basically the world shut down. So, we were really looking for ways to stay relevant and to let the community know that we were still actively moving forward... Click To Tweet

Wiswell has worked in Barry for 14 years in various roles and has served as Activate Barry County Director for one year. One of the biggest challenges in the county, she said, is that its 60,000-plus residents are spread out across nearly 600 square miles.

Delivering Seed Packets to Residents Spread Across Hundreds of Miles

A seed program that delivered thousands of packets of seeds to residents across the vast county is a perfect example of Blue Zones Activate at work, in partnership with other organizations in the county.

Wiswell explains how the seed program came to be. She said, “There was a donation made from our local Walmart to the United Way of Barry County of a huge amount of seed packets — two truck beds full. Lani Forbes, the director of United Way of Barry County came to me and said, ‘Would you be interested in helping to distribute these seeds to the community?’” It just so happened that Blue Zones had just put out an article about how gardening promotes well-being and happiness. And considering that a lot of people were home and had more time on their hands, it seemed like a perfect opportunity to say, ‘Here are some free seeds. We would love for you to plant a garden if you haven’t done it before. It’s a great way to connect with the earth and all the good things that come with gardening.’”

“After we decided that the idea was a good one, we then had to figure out how to get the seeds out to a community sheltering in place and how to do that safely for people, while protecting the seeds from the weather. No buildings were open so we couldn’t do it indoors,” Wiswell explained. The seeds were donated in May so there was also a push to get the seeds out to the community for planting as quickly as possible.

Contemplating the problem, Wiswell came up with an idea. Why not distribute the seeds through mailboxes placed throughout the county? “We decided to place the mailboxes at libraries because they were strategically located in different communities across the county. Mailboxes could be placed outdoors on library grounds. And the libraries were already places where people were used to visiting and congregating prior to the pandemic, so it would be convenient for them. Residents would also have the convenience of picking up their seeds at a time and location that worked best for them.” 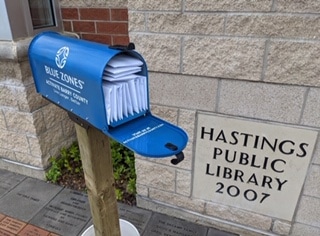 “I had already established good connections with the libraries because we were doing volunteer events through the libraries when things shut down. So, it was an easy ask to say, ‘Hey, if I provide the mailbox and I provide the seeds, would you be willing to have this on your property?’ And everybody resoundingly said, ‘Absolutely. What a great idea.’”

“In typical Barry County fashion, several volunteers came forward to do the spray painting, mailbox assembly, and vinyl lettering with the Blue Zones logo and website,” said Wiswell. “We stood the mailboxes on poles in five-gallon buckets with concrete on the bottom, so they could just be freestanding. And I put together 250 seed packets with a letter from Blue Zones and the United Way, as well as instructions on how to build a raised bed from the Michigan State University Extension.”

Each packet of seeds contained two packs of herb seeds, six packs of vegetable seeds for a variety of different vegetables, and two packs of flower seeds. The mailboxes were placed in front of five libraries and one community center. 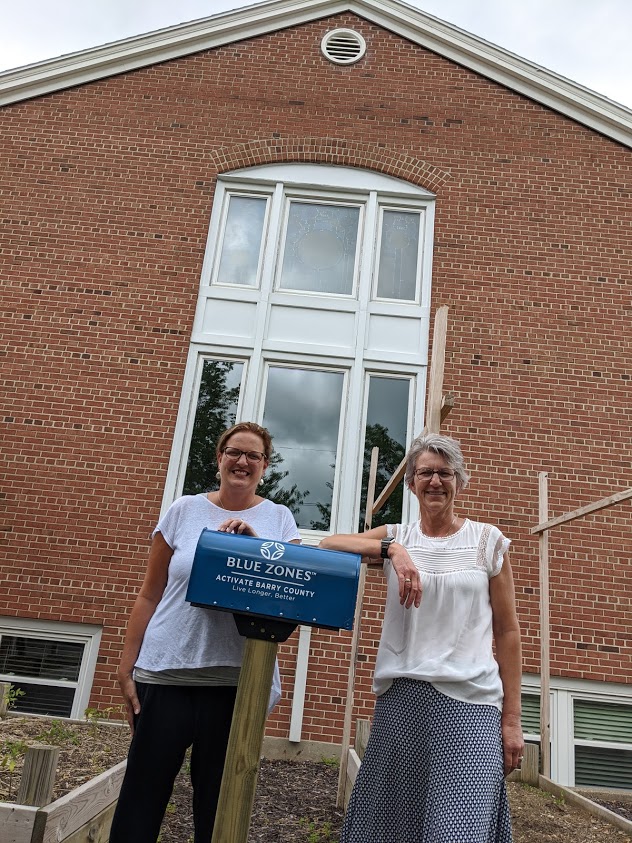 Wiswell said, “Blue Zones partnered with the libraries to communicate to community members that the seeds were available. And it was multiple organizations coming together around something to make it possible. The first round went over with great success. The seeds were gone, people took them, and we refilled the mailboxes again with similar results,” said Wiswell. “The feedback I received from the library directors was that people loved the seeds and were very grateful.”

“It was happenstance that we came up with the Blue Zones Activate Mailboxes because we had the donation of seeds and we needed to get them out safely and securely. And then from there, we thought this is really a nice method to distribute things to the community. And in the Activate model, we’re working primarily in policy areas of built environment and food systems, so I’m always trying to think of ways to engage the greater community and make sure that everybody feels included in the process. We’re thinking we should keep using these mailboxes now that we have them. Why wouldn’t we keep driving people to come to these boxes for different giveaways and to encourage them to start doing Power 9 behaviors,” Wiswell said.

Why wouldn’t we keep driving people to come to these mailboxes for different giveaways and to encourage them to start doing Power 9 behaviors? Click To Tweet

Long term, chronic disease, and obesity are among the health challenges identified in the Community Health Needs Assessment that Blue Zones Activate hopes to address by creating environmental shifts, Wiswell said. And being that Barry County is the first Blue Zones presence in Michigan, she hopes that other localities in the state will eventually come on board.

Wiswell confirmed that Blue Zones Activate is still on track meeting its milestone timelines. “We have just had to pivot to a virtual model instead of holding meetings and summits in person,” she said.

“I think Blue Zones is a great storyteller and engages people in a collaborative fashion without being political. It’s a nice way to bring everybody together collectively and also to partner with other agencies and organizations to help to nudge their initiatives forward. I think the Blue Zones mission aligns really well with our community efforts, removes siloed efforts, and it feels very structured and well supported. I feel like we are moving forward at a great pace, we have great community engagement, and that we are on a path to create some great programs, projects, and policy changes.”