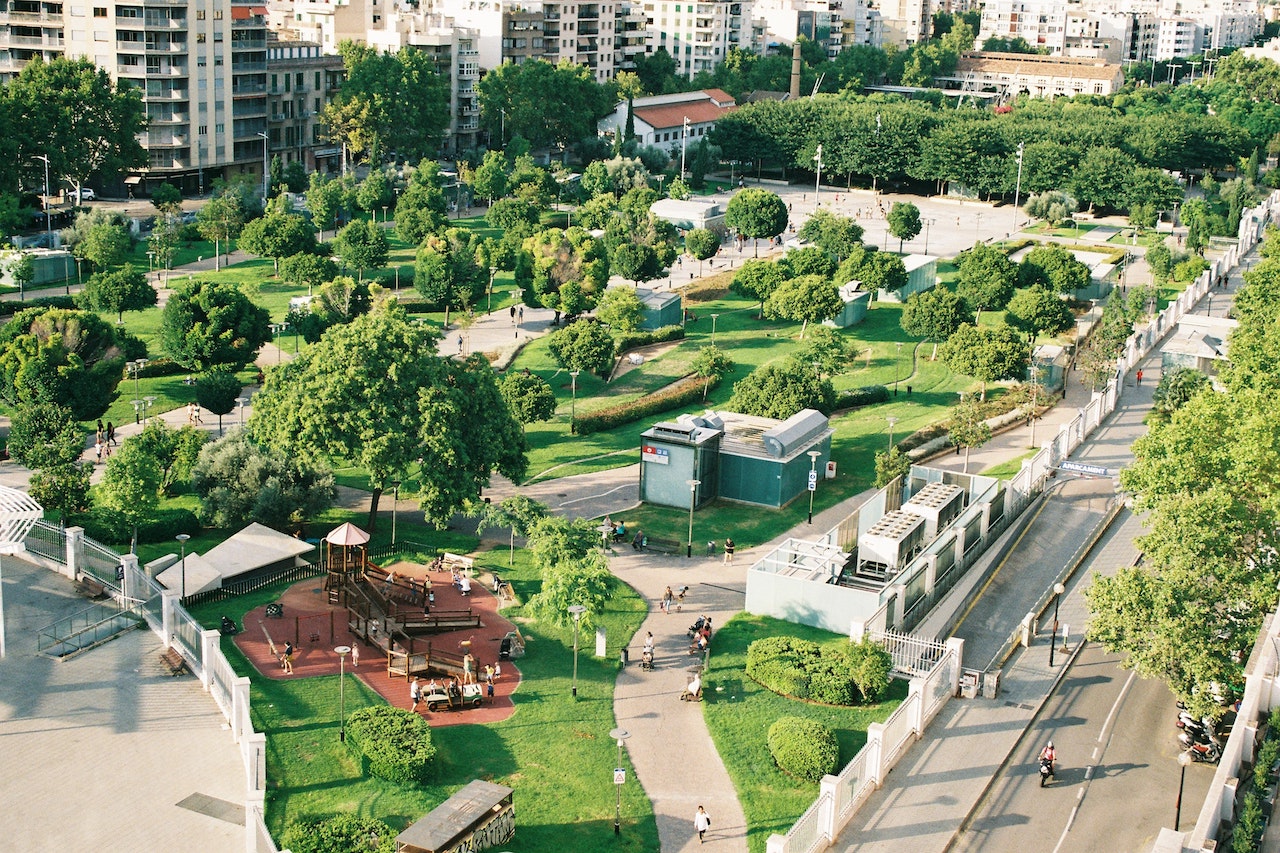 Rewilding: How Cities Are Prioritizing Green Space for Better Well-Being

The idea of grizzly bears prowling sidewalks in Chicago may not appeal to the average citizen (or indeed the animals themselves). However, recent years have seen numerous projects seeking to use aspects of rewilding to help nature claw back some of the urban environment.

Through the process of rewilding, cities can improve both human and environmental health. —@words__by__toml Click To Tweet

The concept of rewilding emerged in the early ’90s and has since led to the reintroduction of gray wolves to Yellowstone National Park and wood bison to the boreal forests of Alaska. The original idea, according to conservation organization The Rewilding Institute, was to reintroduce “apex predators and highly interactive species” to large wilderness areas to restore natural ecosystem balances. The benefits of reintroducing these keystone species include stabilizing populations of other species and reducing overgrazing of native vegetation.

But of course, our cities were once wilderness too.

In the U.K., conservation charity Nottinghamshire Wildlife Trust is hoping to make Nottingham the country’s first “rewilded city,” starting by transforming what was a massive concrete shopping mall built in the 1960s, Broadmarsh, into a haven for wildlife.

“There’s a lot of talk about sustainable cities—clean energy, carbon reduction, sustainable transport,” says Nottinghamshire Wildlife Trust’s Broadmarsh campaign leader Erin McDaid, “but the missing link in these plans is green space itself. To have proper green recovery you have to have restoration of the natural environment.”

There’s a lot of talk about sustainable cities—clean energy, carbon reduction, sustainable transport...but the missing link in these plans is green space itself. —@EmcdNotts Click To Tweet

Of course, any green space—be it a park or public gardens—is likely to attract some wildlife. But at Broadmarsh, instead of the usual monoculture of neatly clipped grass, plans are to restore the area to its natural, historical state: a wetland. A proposal was submitted to the Nottingham city council in December 2020 and is under consultation. Proponents hope it will bring back a number of species now absent from the city of 330,000, including the Nottingham crocus and birds such as reed warblers and reed buntings.

Connectivity is another key principle of rewilding, and long-term plans are to use the Broadmarsh site as the first in a number of habitat stepping stones to link the city with the 1,000-acre Sherwood Forest, some 22 miles north.

However, the trust is realistic about its vision of an urban wilderness. “This is right in the heart of the city so it would need management,” McDaid says. “Rather than turning the clock back completely, we’re looking to bring elements of wildness back, both to the city and into people’s lives.”

With the vast majority of the U.K. population living in urban areas—84% in 2019, and that number is on the rise—the well-documented benefits of natural spaces on human well-being form an important element of the Broadmarsh plans. Time spent in nature is known to lower blood pressure and stress as well as improve immune system function. Getting local residents on board seems to be working: So far, more than 14,700 have signed a message of support for the vision on the trust’s website.

Lucas Rushton, a student at Nottingham University, is one of them. “When you go into the city center it’s just concrete, it’s all gray,” he says. “I don’t see [the Broadmarsh plan] as a normal park. I see it as trees and flowers everywhere and grass growing a bit mad in places, but still with spaces for people to walk. For mental health, having a green area near you is so important, especially in times of COVID when people are struggling.”

The Rewilding Movement Across Europe

In London, too, city dwellers’ desires to forge greater connections with nature are resulting in modest urban rewilding efforts, though unlike in Nottingham the focus has been on enhancing existing green spaces rather than complete overhauls of human-made areas. Since 2000, the city has undertaken the removal of more than 20 miles of concrete tunnels from its waterways and introduced native plantings along their margins. According to Thames21, which helps manage the city’s rivers, the restoration work has helped increase sightings of kingfishers by 450%, as well as boost numbers of other bird and bat species.

There are also plans to reintroduce water voles to a River Thames tributary after they were declared locally extinct (the last official sighting was in 2017). The project is run by Citizen Zoo, a social enterprise that aims to restore biodiversity and reconnect people to the natural world. Work to date has involved habitat restoration, monitoring training, and community engagement programs in readiness for a planned release of the semiaquatic rodents in 2022.

“I used to spot [water voles] a lot when I was younger and knew that there had been a sharp decline in their numbers,” says Citizen Zoo volunteer Amy Stocking. Since she began volunteering in 2019, she has noticed more wildlife along the river: “I have heard woodpeckers pecking in the trees, have seen newts, tadpoles, and dragonflies in wildlife ponds nearby. It shows everyone can make changes that can make a difference to the natural world.”

The German cities of Hanover, Frankfurt, and Dessau have been collaborating since 2016 on a rewilding project called Städte wagen Wildnis (Cities Dare Wilderness). Authorities have set aside plots of urban green space, such as parks and sites of former buildings, with a focus on creating wildflower meadows to increase plant diversity and attract pollinators, as well as making cities more livable for human residents. The project has reported increases in the numbers of birds, hedgehogs, butterflies, and bees, and authorities say the meadows are more drought-tolerant than the short lawns they replaced. As the project comes to a close this year, organizers hope the spaces will be largely self-sufficient, with established plants no longer requiring active management such as watering and weeding.

...organizers hope the spaces will be largely self-sufficient, with established plants no longer requiring active management such as watering and weeding. —@words__by__toml Click To Tweet

Similarly, the Dublin city council reduced mowing and herbicide use in its parks and roadside verges as part of its 2015-20 Biodiversity Action Plan to allow native plants to flourish. Though some public resistance has been reported, with claims that the areas look untidy or that it’s an excuse to save money, the council says that 80% of its green spaces are now pollinator-friendly, which it hopes will help the one-third of native bee species that are at risk of extinction in Ireland.

Meanwhile in Barcelona, coronavirus lockdowns have been credited with an increase in public support for the city council’s urban rewilding plans. Proposals include the installation of some 200 nesting towers for bats and birds such as the alpine swift and black redstart, as well as 40 beehives, and planting plans designed to attract insects.

Where People and Nature Both Thrive

The rewilding movement is making its way across the pond as well. “I believe the best examples of true urban rewilding are occurring in European cities, but there are U.S. cities moving in this direction,” says Frank La Sorte, a research ecologist at Cornell University, who has studied the role of urban areas in bird migrations.

La Sorte argues that the High Line in New York could be considered an early urban rewilding project. Since 2009, the once-abandoned elevated railway has been transformed into a park designed to mimic a wild landscape, with dead plant stems now home to carpenter bees and areas of open grassland inhabited by butterflies such as the American lady. Chicago too is embracing aspects of rewilding. Lincoln Park Zoo’s Nature Boardwalk, once a human-made pond, is now a prairie-style garden full of native plants. And on the Chicago River there are plans to create a floating eco-park called the Wild Mile to help reverse damage caused by industry and pollution.

Rewilding sometimes gets bad press for its association with potentially dangerous animals, so, La Sorte says, the key to developing projects in cities is to ensure spaces are optimized for both nature and human use. “Rewilding can be achieved without the introduction of large carnivores. The closer green spaces in cities can replicate the natural conditions that existed before urbanization, the greater the benefit for the region’s native species,” he says. “These benefits also extend to the human inhabitants, whose physical and psychological health can be enhanced by interacting with nature.”

Back in Nottingham, the Wildlife Trust’s ambitious plans hang in the balance as the council debates what should be done with the land. Despite public support appearing high, competition from housing, retail, and business space are the main reservations here, highlighting another key challenge of city rewilding.

But McDaid believes the project could help deliver on these points too, by making residential and business areas more attractive, bringing in tourism revenue, and saving public funds by improving resilience to events such as flooding. “The quality of the environment is the springboard for everything else,” he says. “Economic growth has always been at the expense of the environment but we need to flip that on its head.”

Economic growth has always been at the expense of the environment but we need to flip that on its head. —@EmcdNotts Click To Tweet

With a decision expected within the coming months, McDaid adds: “The council has said that green space will form at least part of its redevelopment plans—our job is to make sure it’s not tokenistic. It’s not necessarily about the amount of green space on the site, but about having wild green space where wildlife and people can thrive.”

It’s not necessarily about the amount of green space on the site, but about having wild green space where wildlife and people can thrive. —@EmcdNotts Click To Tweet

This article was first published in Yes! Magazine.