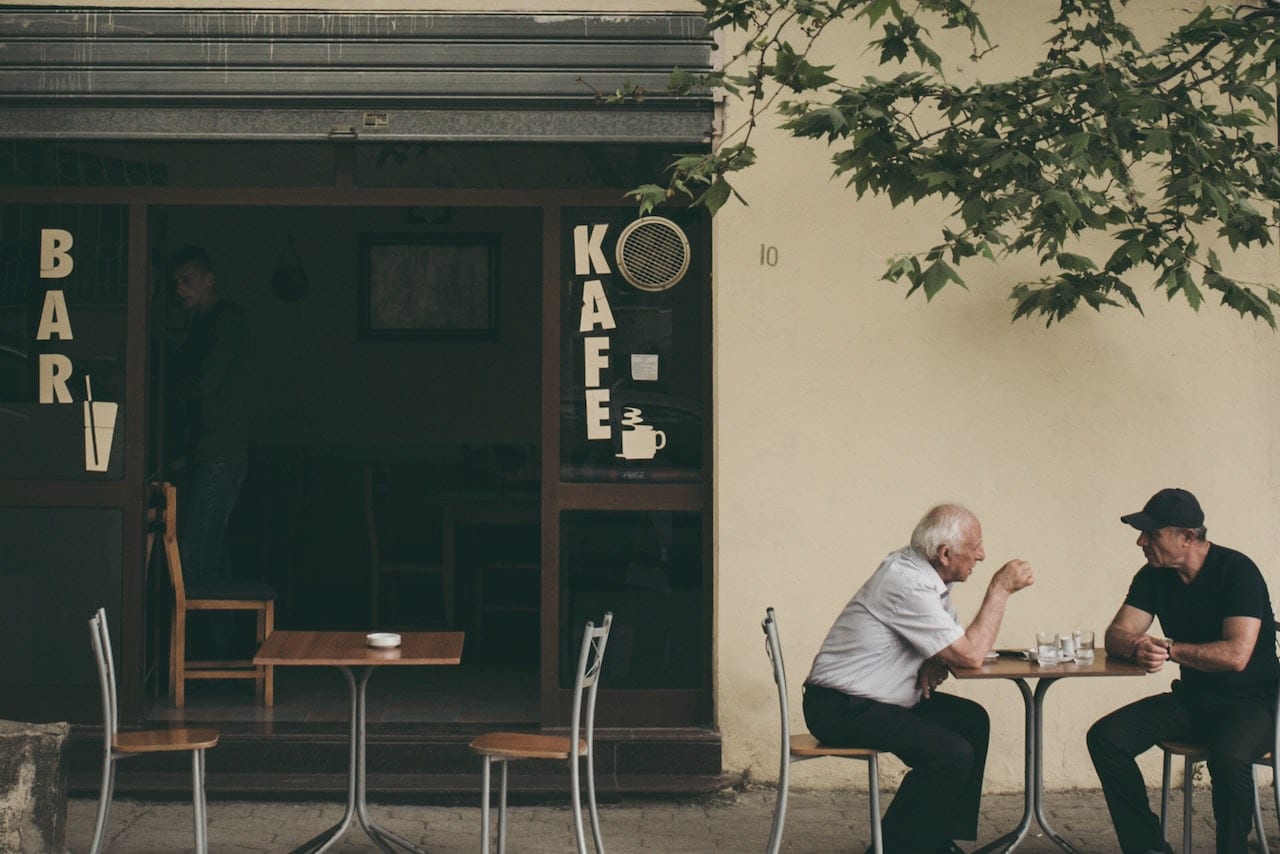 By Daniel Stillman, independent design facilitator, author of The 30 Second Elephant and the Paper Airplane Experiment and Good Talk: How to Design Conversations that Matter, and host of The Conversation Factory podcast where he interviews leaders, changemakers, and innovators on how they design the conversations in their work and lives.

Adapted and Excerpted from Good Talk

When you’re in a stuck conversation, it can be frustrating to try to get someone to agree to our totally reasonable demands or point of view. Why won’t they just agree with us?

During my intensive on Negotiation at Harvard, my negotiation professor, Robert Bordone, told a classic story of lose-lose negotiations: Two sisters were bickering over who would get the last orange in the house. Their mother, annoyed with their squabble, split the orange and gave them each half, leaving both disappointed. One sister wanted the pulp to eat and tossed the peel in the trash. The other only wanted the peel for baking and tossed away her pulp.

Each had failed to ask about the other’s respective interests, to explore all the options on the table, and to find every way in which the orange was valuable. For the sake of the relationship, each got half of what they wanted and wasted the other half. Instead of a delicious outcome, they settled for less.

This isn’t a win-win. Professor Bordone went on to tell us that “untrained” negotiators only ask their counterparts questions about their interests and preferences seven percent of the time.

...untrained negotiators only ask their counterparts questions about their interests and preferences seven percent of the time. —@dastillman Click To Tweet

Finding out why people want what they want is the key to turning stuck negotiations into conversations.

Finding out why people want what they want is the key to turning stuck negotiations into conversations. —@dastillman Click To Tweet

Even worse, most of us prep for negotiations by thinking only about what we want. Very few people spend enough time thinking about what the other person thinks they can and should get and why. A good rule of thumb is to spend half of your time considering the other side’s perspective.

A good rule of thumb is to spend half of your time considering the other side’s perspective. —@dastillman Click To Tweet

How do we go deeper into understanding other people’s perspectives? Use these three levels of goals to peel back the layers in the conversation and understand why people want what they want, and find agreements that work for everyone involved.

LEVEL 1: INTERESTS: Why does someone want what they want? Try saying, “That sounds important to you. Can you tell me why?”

LEVEL 2: OPTIONS: “Hard” negotiators demand what they want. Reply: “That thing you’re asking for is one option. Are there any other options or alternatives you can think of? Can we generate any others together?” Finding all the levers of value on both sides can help open up opportunities to create shared value.

LEVEL 3: LEGITIMACY: When someone throws out a number or any firm position, it often feels like we need to counter. Instead, ask: “Where did you get that number? What can we base a fair number on?” Probing for ways to judge an outcome as objectively legitimate can lower the stakes.

It can be frustrating to engage with people who think differently from us. I don’t relish conflict, external or internal.

But the effort, it turns out, is worth it, and the impact of that effort can be measured. Cloverpop, an enterprise decision-making platform, ran a study of 200 teams making 600 decisions over two years. According to their data, groups that were diverse in age, gender, and geography made better decisions 87 percent of the time. Compare that to an average of 58 percent for all-male groups and 73 percent for gender-diverse groups.

...groups that were diverse in age, gender, and geography made better decisions 87 percent of the time. —@dastillman Click To Tweet

[Related: How to Make Friends and Make Deeper Connections as an Adult]

W. Ross Ashby, a British cybernetician in the 1950s, thought deeply about the power of variety. He defined variety as the number of distinct states a system has or is capable of. His Law of Requisite Variety suggested that our world is complex and that we need to adapt to that complexity to survive.

In terms of overall variety, a group of very similar people making a decision is roughly equal to a single person making that same choice. We can increase diversity by inviting people into the conversation who have different histories, ages, and geographies—but only if they can have a real conversation, which is no trivial matter.

[Related: How to Talk to People You Disagree With]

Our ability or willingness to interact with people who are different from us is a critical part of our OS, worth developing. It’s something our world needs to work on, as well. Without increasing our capacity for engaging with diversity, we limit ourselves to what we currently know and feel. The questions below can help you deepen your empathy for folks you might disagree with.

+ Think about someone you disagree with strongly.

+ What are they choosing?

+ What are they protecting or loving?

+ What is good in their opinion?

Who do you include in the conversation?

When you have a tough challenge to work out, who do you call? Maybe you have a trusted mentor whose brain you can “pick” when you need to. Or perhaps you are the type who invites a group of people to sit around a table and help you think things through. Then again, you might be the sort of person who would rather go for a walk and mull things over.

If you have a preference for small intimate dialogue, that makes perfect sense. Conversations with one other person are complicated enough. There’s that old saying about what you said vs. what you meant vs. what they heard. Those are a lot of voices to parse. Conversations get very complex very fast as we add more and more people. Taming that complexity and expanding the size of conversations into one you can manage takes a thoughtful approach.

Even with no one else in the room, there are lots of voices to contend with. We are rarely of one mind on any topic. How do we deal with disagreeing with yourself? How do we deal with disagreeing with others? When you make that call to invite a group of people together there are two options: choose to invite the people you know will disagree with you or choose to invite the people who are easy to talk to. These preferences for like-mindedness or diversity of thought will also shape your conversations.

[Related: Casual Friendships, Coworkers, and Even Your Outer Circle Friends Can Influence Your Health]

If your conversations were a city, what city would it be? New York, where people go to find themselves? Or Los Angeles, where people go to be discovered? Or maybe it’s less of a city and more of a gated community, with a passcode or a guard at the door. Anyone can move to New York and call themselves a New Yorker. Who gets to decide who is in your inner circle? Could your conversations be as free-flowing as a bustling metropolis?

Where on this map is your team or your organization’s conversations? Where would you place your friend group? 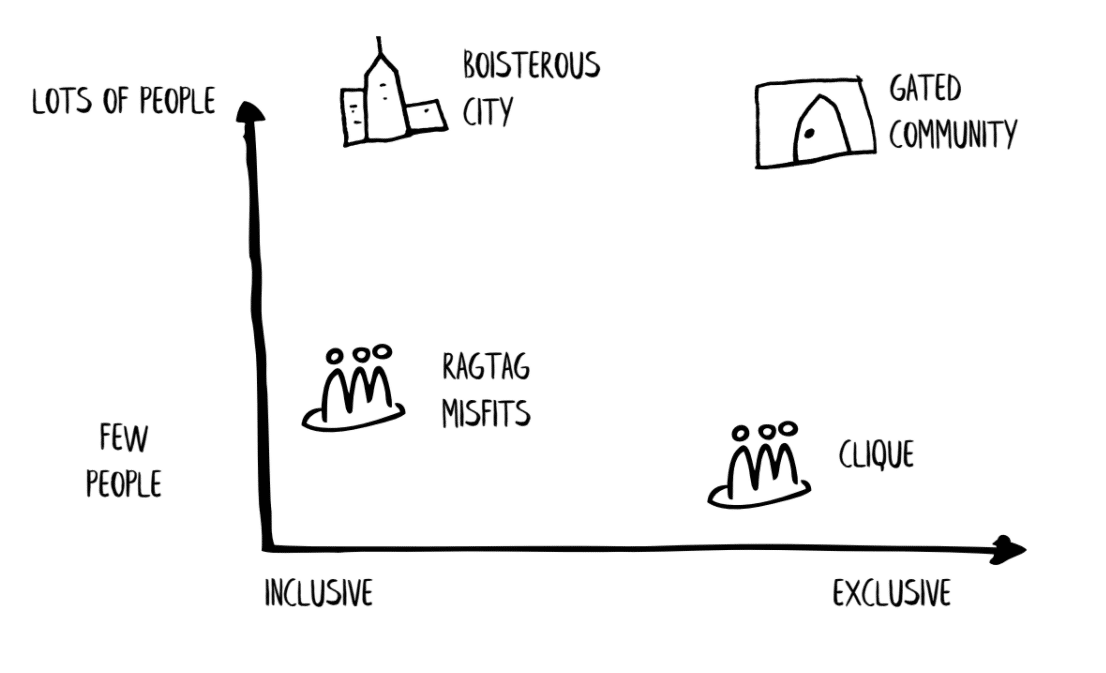 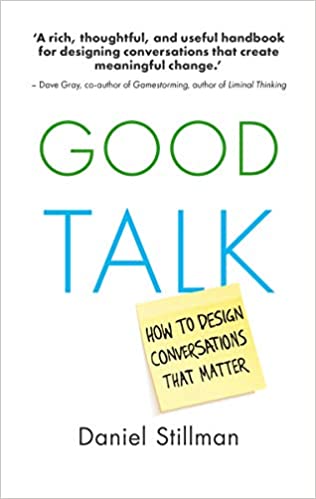 Daniel Stillman, author of The 30 Second Elephant and the Paper Airplane Experiment and Good Talk: How to Design Conversations that Matter, designs conversations for a living, and insists that you do, too. He works with organizations like Google, Nike, and Visa to help them frame and sustain productive dialog, deepen their facilitation skills, and coach them through the innovation process. He also hosts The Conversation Factory podcast where he interviews leaders, changemakers, and innovators on how they design the conversations in their work and lives.