What the Garden-Hacking Grandmas and Grandpas of South Korea Know

By Patrick M. Lydon, an American ecological writer and artist living in Japan & Korea. Founder of City as Nature, arts editor at The Nature of Cities.

Gardening here is not a hobby. It comes from the realization within people that there is inherent value in tending a garden and taking time to be a part of nature.

More than a century ago, urbanist Ebenezer Howard invented the concept of a “garden city”—a city with a bustling urban core, fanning out in to green neighborhoods, and then farther out into farmland, all of it theoretically connected in a semi-closed sustainable cycle.

As a kid growing up in San Jose, California, I wondered why I’d never seen one of these cities, especially because the idea was so old. With its low-density swath of houses, far-flung shopping malls, and tilt-up office buildings framed by varying grids of concrete and asphalt, San Jose seemed so thoroughly to reject everything that Howard’s garden cities were about.

Two decades later, while studying at the University of Edinburgh, I realized a more depressing truth: San Jose was in fact a garden city, albeit a shallow version of what Howard had envisioned. San Jose, along with the numerous other economically productive, ecologically destructive wastes of time, space, and natural resources that we collectively call suburbia, are garden cities, built as a culture based on the dream of endless economic growth sees fit to build them. They are garden cities without garden cultures.

People who inhabit a place can have far greater potential for dictating how space is used. —@pmlydon Click To Tweet

But what if a garden culture could flourish anywhere, regardless of how the structure of a city was designed? And what if, by allowing such a culture to flourish, we could begin to heal some of our most pressing ecological and social issues?

During the past five years, my partner Suhee Kang and I have enjoyed the opportunity to engage somewhat deeply with these kinds of places—both in concrete-lined urban corridors and in lush fields of hillside natural farms. The experience has revealed, with impressive clarity, that the people who inhabit a place can have far greater potential for dictating how space is used than any physical design, designation, or government mandate. 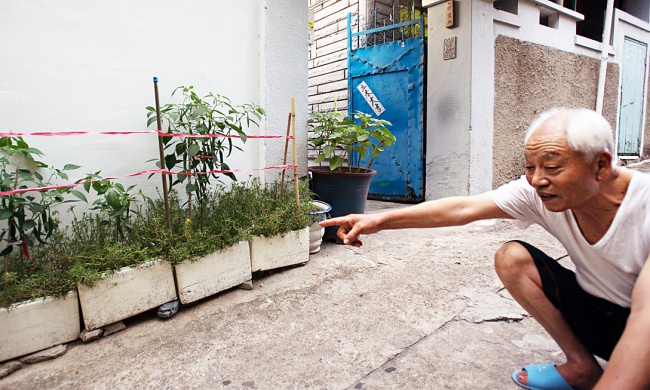 Dae-dong, an old urban neighborhood set into a hill beside the bustling city of Daejeon, South Korea, doesn’t look like an urban gardener’s heaven. Yet in this tightly packed, low-income neighborhood, almost no plot of soil—and in many cases no slab of idle asphalt—is left without some kind of tended plant, be it flowers, corn stalks, summer squash, Korean gochu red peppers, or whatever else the neighbors here favor.

The neighborhood is built to a human scale. It feels awkward to navigate Dae-dong’s broadest roads in even the smallest of cars, and most streets here are pathways, barely wide enough for two humans to pass comfortably. This smallness creates a close-knit, walkable atmosphere, but it also makes gardening very difficult, forcing the utility of space in the strictest of senses.

And yet there is a proliferation of earth cultivation everywhere in the neighborhood, even in the smallest piece of soil, or in a patch of untended weeds in the park, or in an old bathtub left outside. It’s not always “pretty” in the western aesthetic sense, but what we find in Dae-dong is a thriving garden city culture, in a neighborhood with nearly zero planned space for gardens.

The neighborhood’s design does not have much love for urban gardens, but the residents overwhelmingly do. Love for nature is the guiding ethos in Dae-dong.

The people who garden in this particular neighborhood—I fondly refer to them as garden-hacking grandmas and grandpas—are generally from a generation who can still remember the times when they were starving. For much of the 20th century, Korea saw massive shifts in political organization, struggling through a forced occupation, multiple wars, separation, and a slow, often bloody fight for democracy that didn’t formally end until 1987. Understandably, the older generation here sees gardening as a means of survival.

One such man is Hyunsung Park, a 77-year-old retired policeman who lives in Dae-dong on a small pension. We first meet him by chance in the alley in front of his home, and immediately he begins to talk to us about his pepper plants. “They are not so big this year, but they’re plenty spicy. Here, try,” he says as he offers a bite to us. My weak American mouth burns intensely.

Inside his home over a cup of instant coffee, he talks about his struggles, of how his move into law enforcement was prompted by his father’s death, of how the neighborhood was home to refugees during the war. He smiles the entire time.

Park is animated and energetic. “I go to sleep at 9 p.m., wake up at 3 a.m., and immediately go for a long walk through the mountain and forest,” he says, pointing toward the hills on the eastern edge of the city. “After that, I come spend some spend time with my garden and with my family … my life these days is primarily about nature and family.”

South Korea has made a bold move to embody the capitalist Cinderella story, with much success. —@pmlydon Click To Tweet

Over the next few months of our filmmaking residency here, we make it a point to take daily walks, striking up conversations with more Dae-dong grandmas and grandpas, joining them for coffee, tea, and in one case, a bowl of boiled locally grown potatoes, presented to us with much pride. Several of them visit the house we are staying in to chat or deliver food from their gardens, and we often return the favor by bringing them back a dish cooked with their vegetables.

Through these interactions, we come to know Dae-dong as a garden city in ways perhaps unimaginable by planners such as Howard. But the stability of this kind of garden city necessarily relies on its culture, and the reality here is that in the years since this older generation of urban gardeners began their work in Dae-dong, the prevailing culture has gone in the opposite direction. Over the past half-century, South Korea has made a bold move to embody the capitalist Cinderella story, with much success. Most South Koreans under 40 are more concerned with work, study, and vying for a position at Hyundai or Samsung than they are about tending a garden or walking through the forest at 3 a.m.

But if a culture of nature-connectedness could be removed from a country in the span of a generation, so too could it be cultivated again in another.

In nature-connectedness workshops we’ve conducted the past few years in east Asia, Europe and North America, we’ve found a pretty strong indication of this idea’s viability: As soon as we give individuals “permission” to cultivate personal relationships with nature, it comes quite easily.

In Korean wisdom traditions, or those of native peoples in nearly every other part of the earth, we find a vast history that speaks to this understanding that, yes, we had it once, but some of us lost it.

Each of us has the ability to re-establish our relationship with this Earth, and a steadily growing number of individuals and organizations are working with this notion in context of our contemporary culture. From authors like E.O. Wilson, Wendell Berry, and Joanna Macy, to artists like Andy Goldsworthy, James Turrell, and Collins-Goto, to organizations such as the Biophilic Cities Network, the Intertwine Alliance, The Nature of Cities, and our own SocieCity, local, regional, and even global initiatives abound. They are not always visible, and they’re rarely featured in The New York Times or on the evening news, but we find them when we look—unreported and unadvertised yet in plain sight—in neighborhood gardens, living rooms, and tiny alleyways across this earth.

All of this must begin within each of us. Whether we wake up each morning under eaves beneath trees, or on the top floors of towers among a forest of more towers; whether we walk our children to school through a park, or drive our car down the traffic-clogged streets to the market; whether we spend our mornings closed in meeting rooms, or tending urban gardens, each of us are the potential builders of a new culture, and each of our actions offers opportunity for transformation. During our last week in Dae-dong, we decide to bake a cake for the couple, Yongdeok Han and Yangsoon Kim, who own a tiny corner store that we frequent. They stock the usual essentials and junk food that most convenience stores offer, but they also always have a cardboard box placed out front full of fresh vegetables from their garden, which, in Dae-dong tradition, is tucked into a thin strip of soil between a concrete wall and a house. The cake we bring them is made with pumpkins from this box.

They smile at the cake and offer us more pumpkins. Han, the husband, laughs and refuses payment. “Consider it a gift from my heart” he says, now laughing from his gut. “I don’t grow pumpkins for money, I grow pumpkins because I like growing pumpkins!”

In Dae-dong, and in many other such neighborhoods around the world, you can’t say that gardening is a hobby, or even a way to make money. It seems to have a far more fundamental purpose, one spawned by the realization within people, that there is inherent value in the action of tending a garden, and in the action of taking time every day to be with nature.

It’s a common thread among these people: Nurturing a love for nature is an indispensable part of life.

However simple that statement may be, it is also quite powerful to remember and use. Powerful enough to form a foundation where sustainable food, resilient cities, and nature can coalesce through a reconnecting of our culture to this earth with which we live—a culture that can perhaps, finally toss old Ebenezer Howard’s garden city plans into the compost bin.

Article and Photos by Patrick M. Lydon, an American ecological writer and artist living in Japan & Korea. Founder of City as Nature, arts editor at The Nature of Cities.

This article was first published on Yes! Magazine.