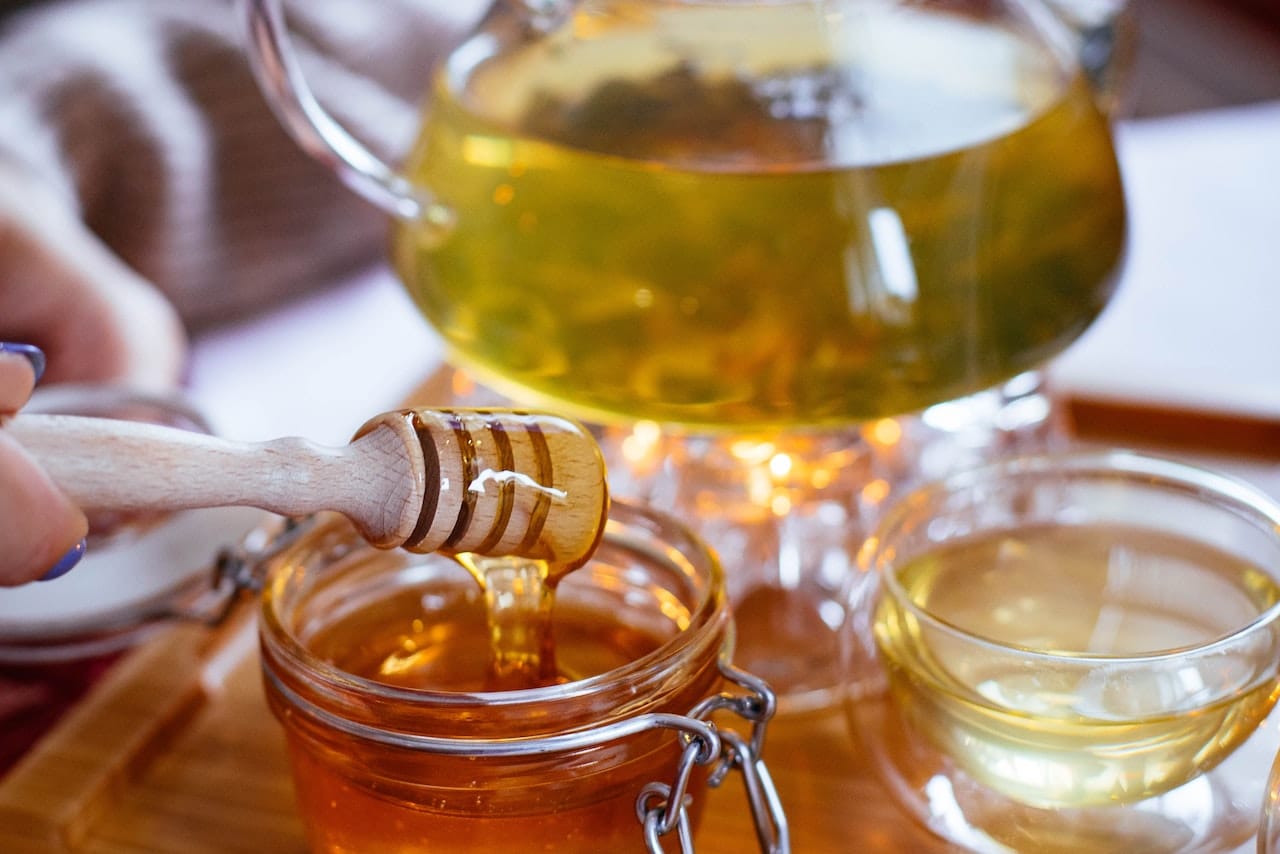 Honey isn’t just sweet and tasty. It’s been used for centuries in traditional medicine for its antioxidants and its anti-microbial and anti-inflammatory properties.

Honey is produced everywhere honey bees are found and is consumed in all parts of the world. In Ikaria, Greece, one of the original blue zones that are home to the world’s longest-living people, many older residents eat honey at least twice a day. They stir it into their coffee in the morning and prior to dinner. Ikarians also use honey to treat everything from the common cold to minor wounds.

In Ikaria, Greece, one of the original blue zones that are home to the world’s longest-living people, many older residents eat honey at least twice a day. Click To Tweet

According to the Mayo Clinic, honey is commonly used as a cough suppressant and topically to treat minor burns and wounds, but research also shows that it has the potential to be used to reduce the risk of cardiovascular disease, to relieve gastrointestinal tract issues, and to help relieve neurological conditions such as depression and anxiety. An article based on clinical research published in the Pharmacognosy Research Journal concluded that “honey could be considered as a natural therapeutic agent for various medicinal purposes” with evidence that it has potential uses in treating diseases that range from asthma and diabetes to cancer. The NCBI said that flavonoids and polyphenols, which both behave like antioxidants, are two of the main bioactive molecules found in honey.

How do bees make honey and what’s in it?

Honey is unique because it is the only food that people eat that’s made entirely by insects. You might say it’s their life’s work. According to the American Bee Journal, the average honey bee spends its entire lifetime to make just a twelfth of a teaspoon of honey.

Honey is unique because it is the only food that people eat that’s made entirely by insects. Click To Tweet A bee produces honey by first collecting the nectar droplets from flowers with its long proboscis or tongue. Once digested by the bee, the nectar is broken down from complex to simple sugars, and then the substance is passed on to a worker bee that returns to the colony and passes it off again to a house bee that packs it away in the hexagon-shaped cells of the honeycomb. Bees then dry the honey with a warm breeze made from their beating wings.

Honey has about the same calories as table sugar and is about 80% sugar and the rest water, with small amounts of antioxidants, amino acids, vitamins, minerals, iron, and zinc.

How to use honey

A natural gluten-free sweetener that has a slightly lower glycemic index than processed sugar, honey is an excellent substitute for sugar in recipes. It’s also great to keep on hand for sweetening drinks and food. Honey is a versatile kitchen staple so feel free to get creative when using it. Below are just a few examples of delicious ways to use honey in your kitchen.

Besides its flavor and versatility, honey is also very stable and will virtually last forever when stored properly. Jars of well-preserved honey that were thousands of years old have been excavated by archaeologists in places like the Republic of Georgia and in a  pharaoh’s tomb from ancient Egypt.

Besides its flavor and versatility, honey is also very stable and will virtually last forever when stored properly. Click To Tweet

The Blue Zones honey collection includes a unique selection of raw honey and spreads. Our honey is produced by bees and sustainably sourced in the Nicoya Peninsula in Costa Rica. Our bees there help pollinate 70,000 hectares of the last Tropical Dry Forest Conservation Area in America, while our products provide direct and indirect jobs to Nicoyans. Our raw honey is 100% natural and harvested from wild bees that gather nectar from a greater variety of flowers for a more complex flavor. Blue Zones Nicoya honey is gluten-free and contains no artificial ingredients, preservatives, or added sugars. Our raw bee honey comes in 350-gram or 500-gram honeycomb-shaped jars or an easy-serve 700-gram bottle. Or try our unique, award-winning reserve honeys. Reserva Palo Verde is an extra clear white honey harvested along the banks of the Tempisque River. Its flavor has tones of melon, ripe pear, and lavender. Reserva Conchal is a light-amber-colored honey with flavors of pineapple, mango, peach, and caramel. Our unique three-pack honey spreads combine honey with the flavor of fruits and other ingredients used in the blue zones like cacao, tamarind, guava, and more. The spreads are great served on bread, stirred into yogurt, or for baking.