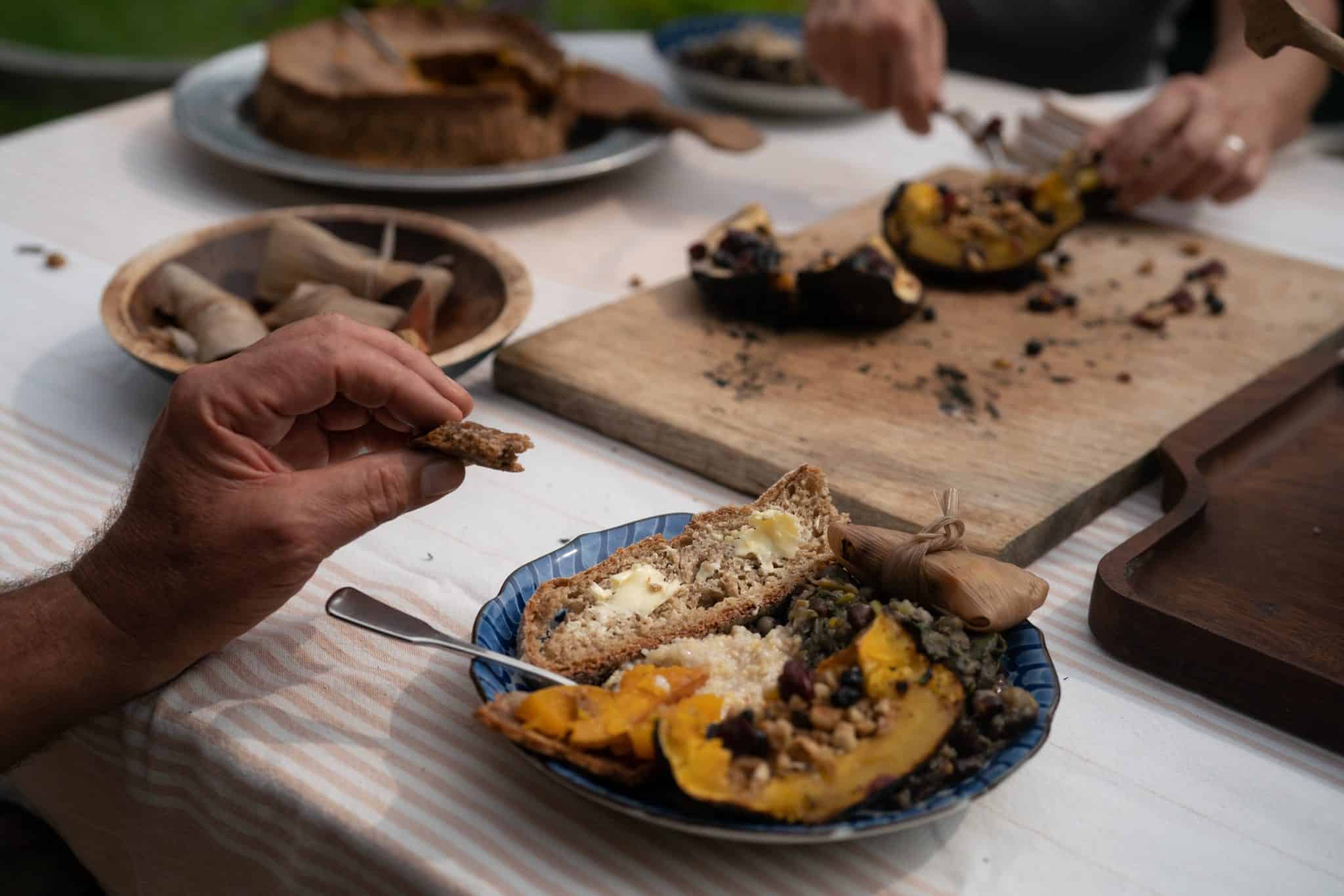 Excerpt adapted from Blue Zones American Kitchen by Dan Buettner, which uncovers the traditional roots of plant-forward cuisine in the United States and celebrates the chef and cooks who’ve passed recipes from generation to generation across the regions and cultures that have shaped America’s healthiest food landscapes.

In late fall 1620, 102 sea-weary Pilgrims arrived at Plymouth Rock, mostly sick and suffering from malnutrition. After 55 days surviving on rations of dried meat, hard biscuits, and beer, they reached a cold, strange world where they had little knowledge of local food sources. Almost half the new arrivals died that winter—probably from scurvy and pneumonia. If not for the generosity of the Indigenous Wampanoag people, who observed the floundering immigrants, the rest might have perished too. But they took pity and taught the Pilgrims how to tap maple trees for syrup and where to find blueberries and cranberries, which likely cleared up their scurvy. Most important, the Wampanoag showed them how to cultivate local corn, squash, and beans—staples that had sustained their tribe for generations and would fuel the Pilgrim descendants’ survival for centuries to come.

A year later, probably in October 1621, the two peoples came together for a harvest celebration that two centuries later European descendants called “Thanksgiving.” But that occasion was nothing like the Thanksgiving we celebrate today. It was “less about celebration and more about exchanging knowledge and a show of force,” Carol Wynne, a Mashpee Wampanoag culture keeper and clan mother tells me. “Most of what we think of as Thanksgiving is a myth.”

That includes the food.

Most of what we think of as Thanksgiving is a myth. That includes the food. —Carol Wynne, Mashpee Wampanoag culture keeper and clan mother Click To Tweet

Little is known of what was on the menu at that original Thanksgiving harvest meal except a reference to fowl and deer in a letter from colonist Edward Winslow. Though the Wampanoag did hunt wild game and collect scallops and oysters, those made up less 20 percent of their diet. More than 70 to 80 percent of their diet came from plant-based sources, both farmed and gathered. That’s why I asked Carol and her friend the food anthropologist Paula Marcoux, author of Cooking With Fire, if they would put their heads together to re-create an early 17th-century meal.

In the courtyard of Paula’s home, Carol looks serene and seemingly impervious to the summer heat. She prepares dishes from traditional Wampanoag ingredients. Over an open fire, she roasts squash stuffed with hazelnuts, dried blueberries, and maple syrup. In a pot off to the side, she boils samp, a cornmeal of sorts. In a third pot filled with sassafras tea, she poaches slices of pumpkin wrapped in corn husks. 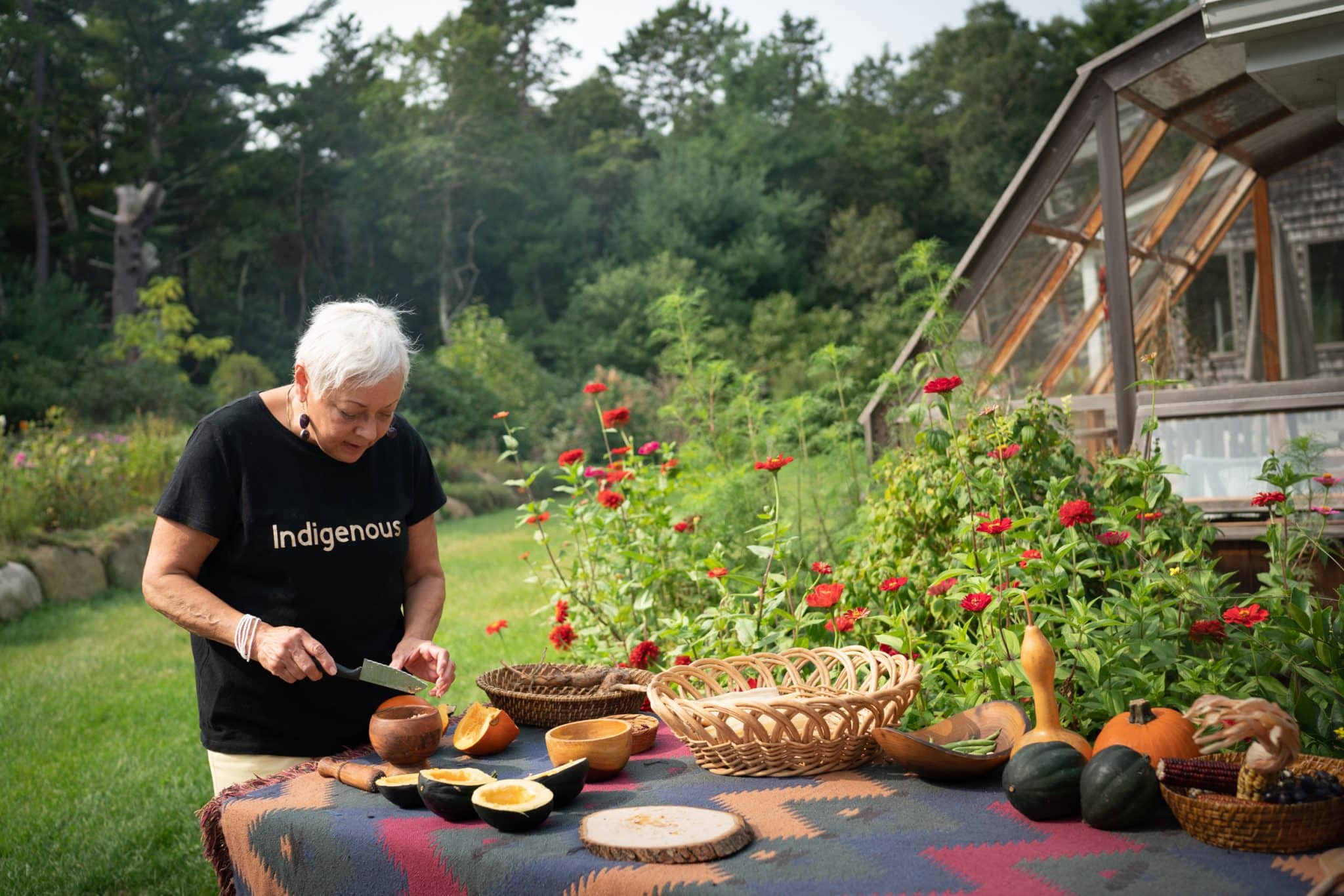 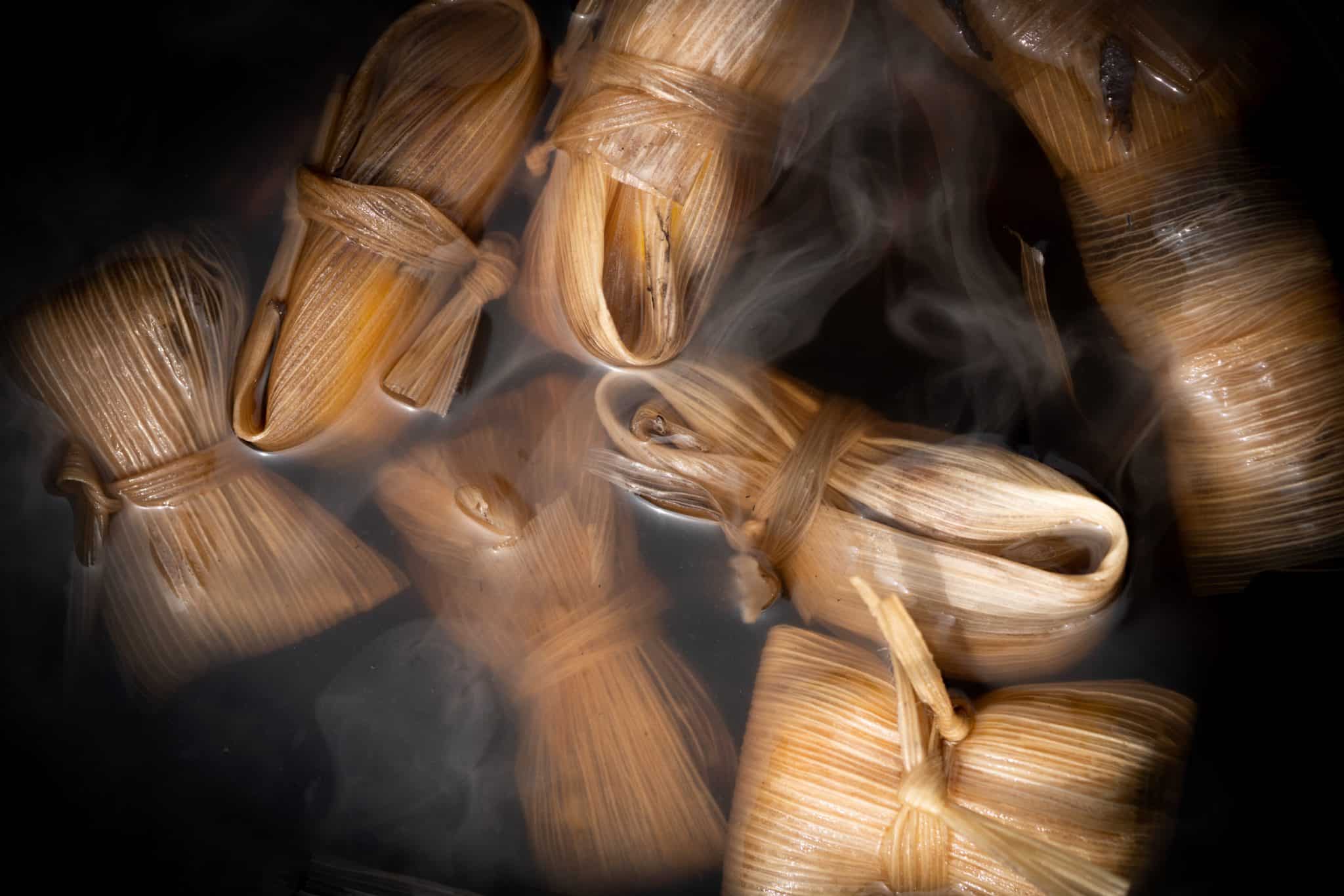 Over another fire Paula shuttles between three black pots hanging from a wooden cooking tripod. In one pot, she boils pumpkin and apples for a pie filling. In another bubbles a 1620s Plymouth Succotash made from a recipe dating to the early 17th century. Paula has adapted this Wampanoag msiquatash stew of hominy, beans, and squash by gussying it up with green beans, onions, and herbs. The Wampanoag were also known to add Jerusalem artichokes, peanuts, acorns, chestnuts, and walnuts, the latter ingredients sometimes powdered to serve as a thickener. “My particular obsession with history affords me the fun of networking with long-dead cooks in their long-gone kitchens through archival and archaeological sources,” Paula says while stirring a pot. “It’s a thrilling privilege to conjure their wisdom through fire.” 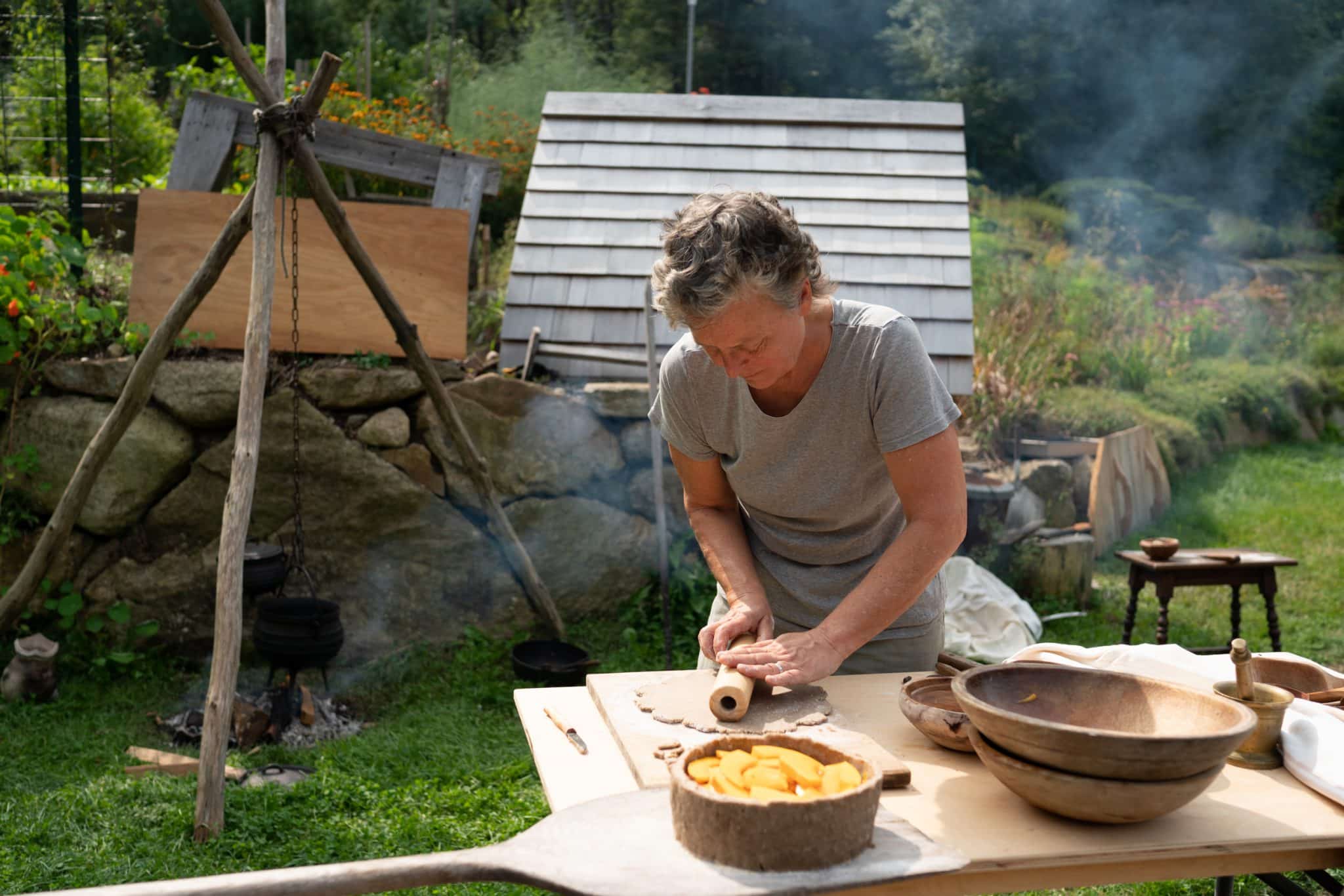 It’s a thrilling privilege to conjure their wisdom through fire. —Paula Marcoux, food historian and author of Cooking with Fire Click To Tweet 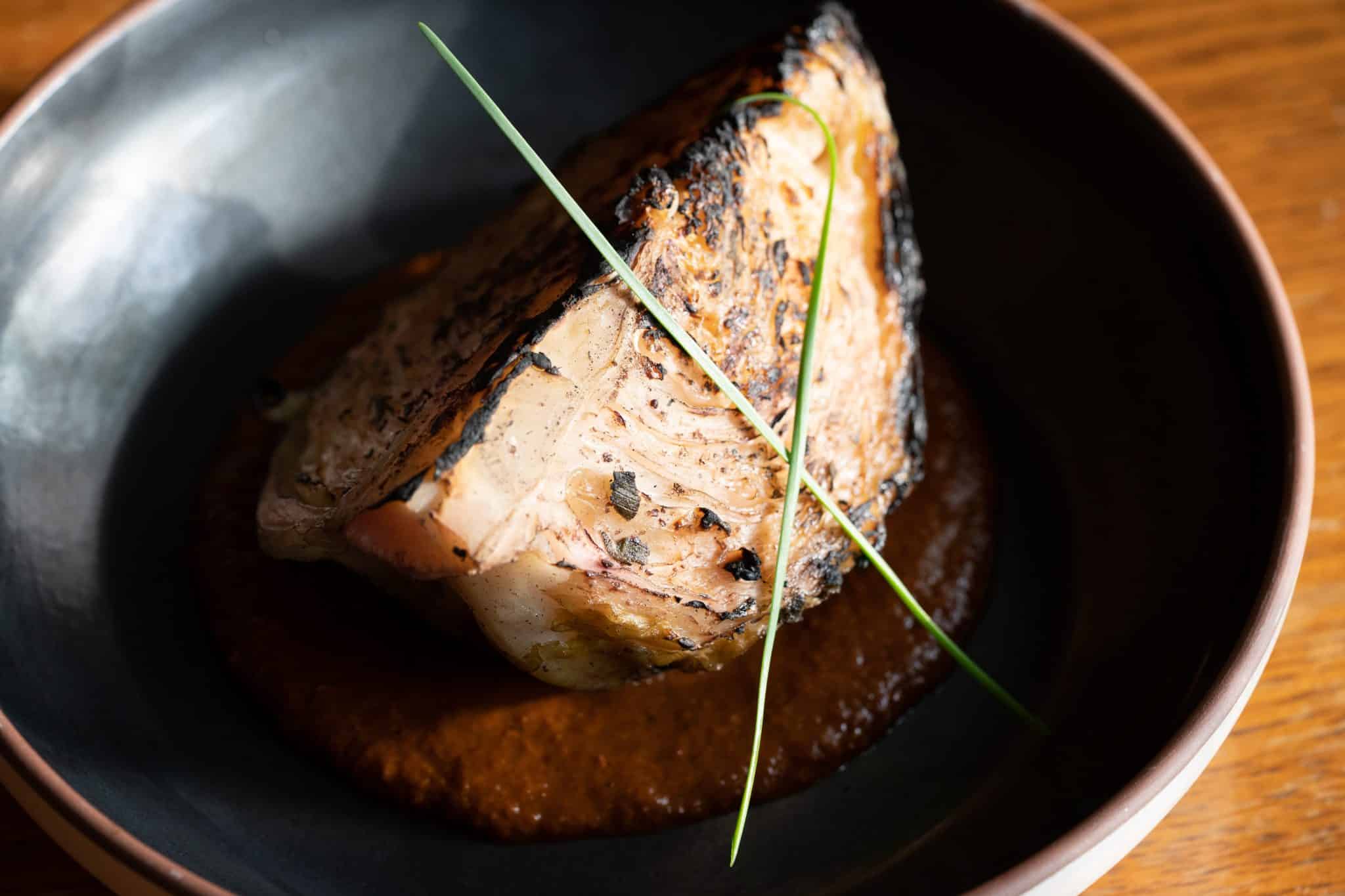 Paula tells me of the incredible culinary wealth that Native Americans gave us, including sunflowers, wild rice, sweet potatoes, tomatoes, peppers, peanuts, avocados, papayas, potatoes, vanilla, and cacao. Without the ingenuity of Indigenous people, we’d know nothing of vanilla ice cream, Hershey bars, or french fries. Then again, perhaps that would be a good thing…

Could foods from the TRUE first Thanksgiving hold secrets to a longer life?

In the TODAY Show segment below, Dan is joined by NBC’s Cynthia McFadden to answer an intriguing question: Could the first Thanksgiving hold some secrets to living a longer, healthier life?

“All we really need to know about eating as a healthy nation was here when the pilgrims arrived 401 years ago,” says Dan Buettner. “If we were still eating like the Wampanoag, 90 percent of the chronic disease cross that we’re bearing in this country would go away.”

Excerpt adapted from Blue Zones American Kitchen by Dan Buettner, which uncovers the traditional roots of plant-forward cuisine in the United States and celebrates the chef and cooks who’ve passed recipes from generation to generation across the regions and cultures that have shaped America’s healthiest food landscapes.