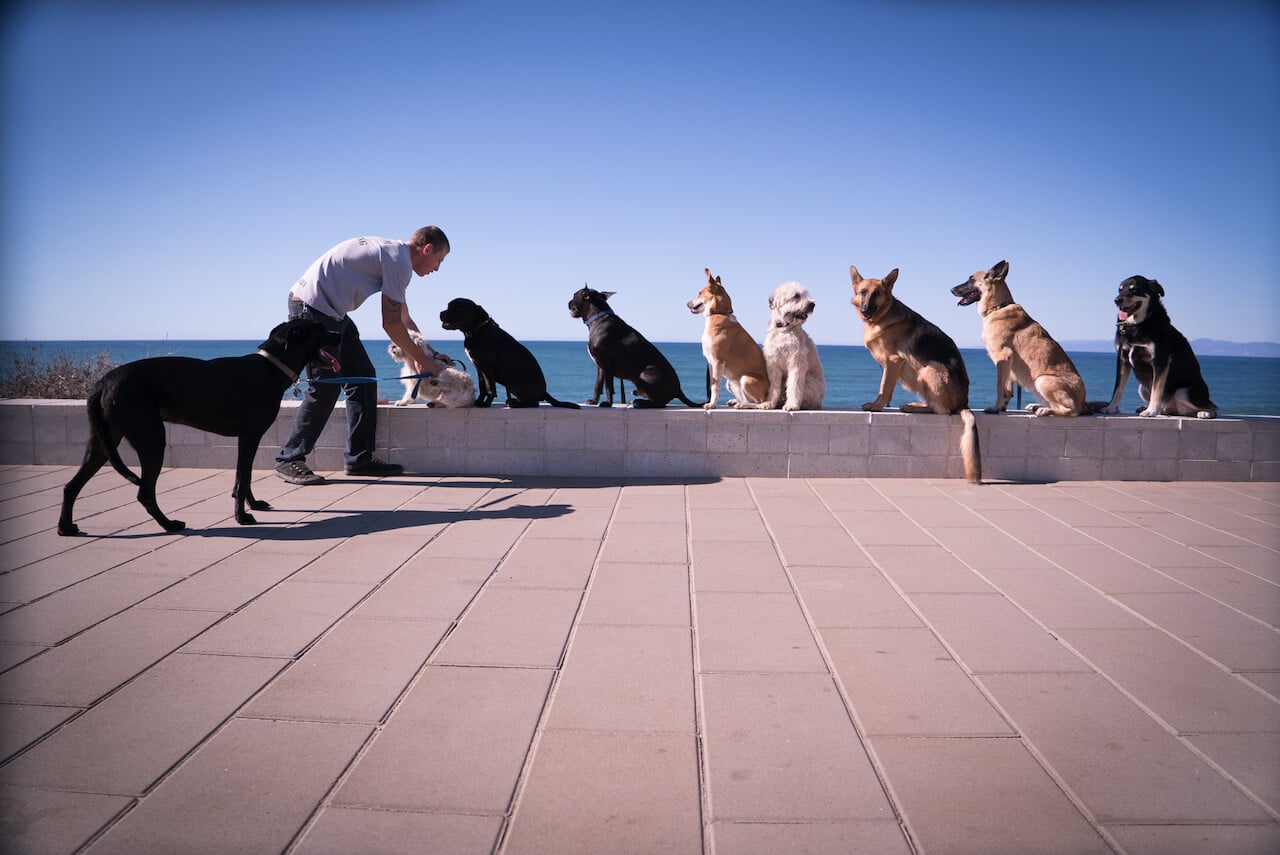 By Steve Friess via Considerable (Photo by David McLain)

This article originally appeared on Considerable, a new media brand for people who are redefining what it means to grow older and looking forward to what’s next.

Maybe you’re newly single and want a little comfort. Or you just retired and finally have the time. Or maybe your kids are grown and your nest is empty and you’ve been thinking how nice it would be to have a companion in the house, one you could coddle, who would adore your every move, miss you when you’re gone and do a dance of joy whenever you came home.

But what kind of dog?

Experts say the key is matching the dog to your lifestyle and being honest about how active you are, and how much time you can be with the dog.

Experts say the key is matching the dog to your lifestyle and being honest about how active you are, and how much time you can be with the dog.

“A dog will probably increase the amount of exercise you get,” says Christie Keith, a journalist who specializes in animal welfare.

But, she warns, don’t get a dog that will push you so far past your baseline that you will not be able to realistically meet that dog’s needs.

“Because then both of you will potentially be unhappy,” she says.

The American Kennel Club recognizes and registers more than 190 breeds and is a great online resource, whether you are looking for reputable breeders or breed-specific rescue organizations.

Be ready: Any good rescue outfit or breeder will have lots of questions for you.

“They want to know your activity level, your dog experience, the condition under which the dog will be kept, if you have a fenced yard, things like that,” says Kim Cochran, a former Australian Shepherd breeder based near Port Huron, Mich.

With all that in mind, it’s still tricky to know which breed is right for you. Canine partisans eagerly sang the praises of just about every breed I met at the 2019 Michigan Winter Dog Classic in suburban Detroit last month. It’s one of many feeder events around the world leading up to the Westminster Kennel Club Show, which is held in New York.

Okay, not every single one. The guy with the Bouvier who told me the 100-pound beast loves to back up into people and, thus, “will knock you down and break your hip if you’re not careful.”

And I just personally don’t like pugs or bulldogs, both of which pop up on similar lists often but are prone to respiratory problems that can be distressing and expensive to owners.

So this is a subjective list, but one based on conversations with more than a dozen trainers, breeders, and other assorted experts. It’s also an attempt to offer something for everyone, given that the needs, lifestyles, and temperaments of people 50 and older are as varied as the dog world.

Here are our rankings, which took into consideration these factors: health, longevity of the dog, cuteness, potential to be trained, friendliness and ease of care.

You and your basset hound might disagree with our findings.

If you’re looking for something a bit different-looking but just as affectionate, long-living, portable and trainable as the rest of the options on this list, check out the Chinese Crested.

There are two versions – the hairless, in which the dog’s only fur is on its head, tail and lower legs, and Powderpuff, with a more conventional coat – but the loyal temperament and elegant structure is the same.

Chinese Cresteds typically weigh about 10 pounds, don’t require much exercise and are notoriously friendly to strangers. They do require some special care, especially the hairless, whose exposed skin is prone to drying out or getting sunburnt.

But that just means you have a legitimate, non-pretentious reason to indulge in clothes for your dog!

“They are intriguing-looking and they will certainly get you tons of attention,” Keith says.

One of the breeds with the highest minimum life expectancy at 14, Hollywood has unfairly sullied these amazing, smart and loyal little guys by stereotyping them as very yappy and the fashion accessory of the vacuous.

The reality is, they can be easily trained not to bark wantonly, they don’t need all that much exercise and you haven’t felt loved until a Chihuahua looks upon you with that Nancy Reagan gaze.

What’s more, for those who like to cuddle with their pups at night, many Chihuahuas love to slip under the covers and remain there for as long as you do.

Downside: There is a stigma about these dogs that is hard to shake. And, yes, if they’re not trained early, they can be snappy and barky.

So popular that there’s a famous – and delicious – black licorice candy in its iconic shape and color, Scotties are loyal, friendly and energetic, so be aware they need walks and playtime.

Three presidents owned them, as did both Hollywood Golden Age feuders Joan Crawford and Bette Davis. Scotties are for people who want to be the sun and moon for their dog, as their demeanor to outsiders may seem standoffish but with their humans they love hard.

They do tend to bark less than their well-known cousin, the West Highland White Terrier, which is one reason they make this list over other block-bodied terrier breeds.

“They’re incredibly handsome, so if you wanted to go walk your dog and have everybody talk to you, it’s a great choice,” Keith says.

Downside: That bark is really loud.

If you like your dogs to seem like living dolls and perpetual puppies, the regal and proud Maltese is a terrific choice. They even require a clip of some sort to keep their silky coat up out of their eyes, a need that has led to an entire Maltese accessory industry.

Malties are beloved because they are content to just sit in your lap for hours on end, they like kids, cats and other dogs, and they are compact enough at less than seven pounds to carry in a handbag.

“They are a great choice for a first-time dog owner,” Keith raves. “A lot of people say Malties are too small and too fragile to play with children but I’ve known tons of Malties who were fantastic around kids as long as the kids don’t trample them.”

For more active people looking for more than a lap dog, there’s nothing quite like the company of this totally chill, easily trained, and extremely sweet breed. They love long walks or runs and are known to be great even with rambunctious grandkids and cats, but their need for stimulation means they go a little batty if they’re left alone at home too much.

What’s nice is that they mellow as they age, and many once-active seniors find their golden retriever intuitively understands when they need help keeping balance as the human gets older. These aren’t great for apartment-dwellers and do shed a lot or, as Cochran puts it, “They come unstuffed, like someone opened a plush toy.”

Still, Cochran says, “By and large, they’re pretty mellow. The original goldens were bred to be club gun dogs, meaning they’d go hunt with anyone who needed a dog, so they were bred to get along with everybody.”

Downside: With the highest incidence of cancer of any breed of dog, their life expectancy is only about 12 years.

Also known as “weiner dogs” because of those long, reddish brown bodies propped up on very short legs, these guys are loving, friendly, and very funny to watch when they play with a toy.

Their size—the standard runs about 25 pounds and the miniature is under 11 pounds—makes them great for apartments and easy to walk. Daschunds require little grooming and hardly shed at all, so they’re very low-maintenance. They also often survive into their late teens which, in the dog world, is forever.

“For the people who love them, there’s no other breed for them,” Keith says.

Downside: They are very prone to back injuries and obesity. Jumping on and off sofas and beds is discouraged, so either you should lift them or set up steps or ramps.

Originally not on this list because I associated the breed with Charlotte York’s prissy pet on Sex and the City, both Keith and Cochran lobbied for their inclusion.

“People find them enchanting,” Keith says. “If you want a dog that will want to do things with you, play with the kids, go to the park and play with other dogs, that’s a great choice. They’re very easy to train.”

They’re also easy to groom—they have beautiful coats that don’t get tangled as easily as, say, the Pomeranian.

Downside: People will say, “Oh, just like Charlotte York’s dog on Sex And The City!”

If you’re looking for a larger dog and feel guilty about acquiring a dog from a breeder, most greyhounds that become personal pets come from rescue organizations who foster them after their careers as racing animals end. That’s usually between two and five years of age, so they still have plenty of living to go.

Greyhounds are incredibly gentle and elegantly sleek dogs, known to curl up and sleep for hours and require, perhaps surprisingly, very little exercise. In fact, experts suggest if you want your greyhound to jog with you, you need to build her up to it with shorter jaunts.

Greyhounds must always be leashed when not at home because they have an instinct to chase that could become dangerous for both of you.

“For a dog that is bred to hunt and chase or race, they’re actually very laid back,” Cochran says. “They’re very sweet dogs.”

Downside: They cannot be trusted off-leash. You must have a yard or a fenced dog park nearby where they can run.

There’s a reason the poodle lands on every list like this—and why they’re so constantly being crossbred with everything from Golden Retrievers to dachshunds.

They’ve got it all—calm and adoring temperaments, hypoallergenic fur that does not shed and innate intelligence.

“They love to play,” Keith says. “They’re great with kids, great with strangers, very friendly, and attract a lot of interest from other people so they’d be great if you’re looking to have more social interactions.”

The toy versions, which typically max out around six pounds, are obviously better for apartment-dwellers. Poodles do need to be groomed about once a month, so that’s an expense to take into account.

Downside: They can be prone to health issues, including a skin condition known as sebaceous adenitis.

Just. Look. At. That. Face. Adorable, soft and earnest, a typical Pom weighs less than eight pounds and has pretty much one life goal: to please you. They can easily be taught to fetch ping pong balls, and that’s often about as much exercise as they need.

As furry as Poms are, they tend to concentrate their major shedding to about twice a year. They do need to be brushed regularly; if you do, you can minimize the groomer visits to about four times a year.

Oh, and here’s a huge bonus for older people with mobility issues: Pom puppies can be trained to eliminate in “litter” boxes filled with equine wood pellets. It doesn’t stink like cat litter.

Downside: They can be barky and high energy. But with a face like that, who cares?

[Blue Zones Editor’s Note: Furry friends like cats and dogs help with loneliness and companionship and happiness, but getting a dog also encourages people to walk often and regularly.]